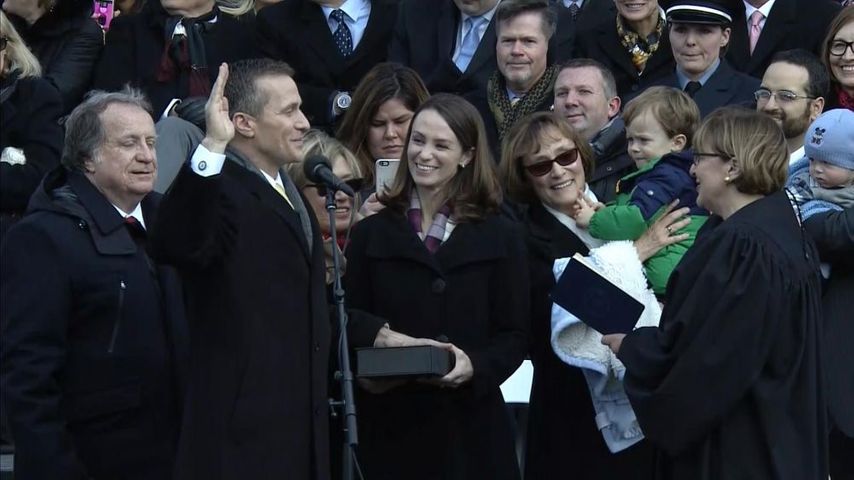 JEFFERSON CITY - Eric Greitens is now officially Missouri's Governor. Greitens, along with four other statewide elected officials, took their oaths of office on the steps of the Capitol Monday.

Before Greitens took to the podium, Josh Hawley was sworn in as the Attorney General, Eric Schmitt as State Treasurer, Jay Ashcroft as Secretary of State and Mike Parson as Lieutenant Governor.

After the stroke of noon, Greitens took his oath of office.

In his acceptance speech, the governor began by expressing appreciation for the sacrifice and dedication of veterans and their families. Greitens said as a former Navy SEAL, he understands that "so many have given so much for this state."

The governor promised he would fight for change in his term ahead.

"The people have spoken, and a new direction has been decided," the Governor said. "For decades, Missourians have talked about change. Now, it's time to fight for that change."

The governor went on to say, "I answer to the people. And I come as an outsider, to do the people's work."

Greitens admitted there are trying times ahead.

"There are big fights ahead for big things," he said. "Our new administration won't back down, because of political pressure, or political correctness. Yet even as we fight for our convictions, we resolve that our greatest conviction is to love our neighbors as ourselves."

He encouraged the people of Missouri to be patient, and hold fast.

"No one imagines that all of these battles will be won overnight, over 4 years, or even 8," he said. "But we begin today."

Greitens took a strong stance against crime, issuing a solemn warning to criminals in the state.

After the ceremony was over, Greitens completed his first act as Governor by signing Executive Order 17-02, to ban gifts from lobbyists to state employees in the executive branch.

Eric Greitens succeeds Democrat Jay Nixon as Missouri's Governor. For the first time in Missouri's history, the state will have a Republican majority in both chambers of the legislature, and a Republican in the governor's mansion.

After the 2017 legislative session, Speaker of the House Todd Richardson shared a message of optimism from the Republicans.

"As a caucus we have a laid out an aggressive agenda," he said. "You're going to see a lot of common ground between where the senate is, and where, the house is, and the governor."

The House Democrats shared a message of "cautious" optimism.

Representative Kip Kendrick said he hoped the governor will make good on his promise to fight government corruption.

"There is a clear mandate from the people of Missouri that we end business as usual," Kendrick said.

Kendrick said the House Minority has adopted Greiten's "seven campaign promises" as their own party platform for the 2017 legislative session.