Event provides space for immigrants to tell their stories 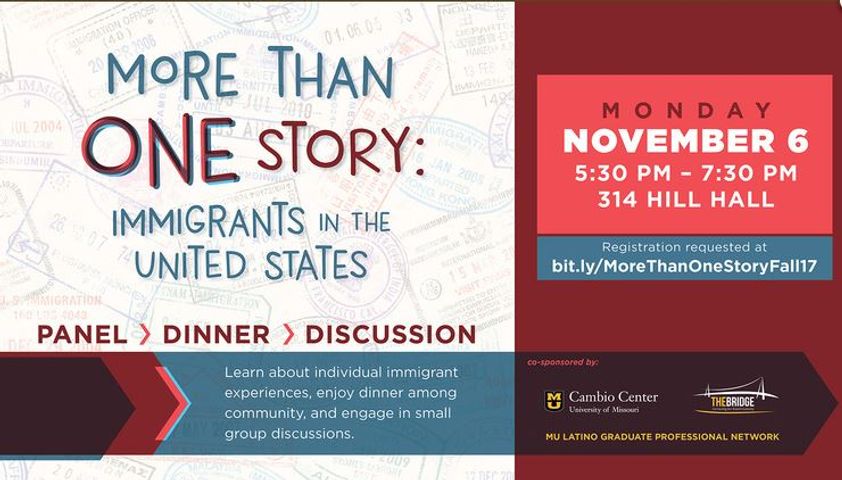 COLUMBIA - About one in four children under 18 in the United States have at least one foreign-born parent. Due to this growing number and the recent controversial political conversations, three MU organizations banded together to host an event in hopes of raising awareness for the challenges immigrants face.

Thursday, panelists told their immigrant experiences to members of the community at the More Than One Story: Immigrants in the United States panel dinner discussion.

The Bridge in the College of Education, the Cambio Center & MU Latino Professional Network co-sponsored the event.

They chose the name "More Than One Story" to symbolize the diverse locations migrants come from and every immigrant has a different experience.

Kania Johnson, student advisor for The Bridge, said, “It’s just important for people to understand that everyone’s story is different, and what brought them to the United States and the things they have to go through aren’t always similar,” Johnson said.

Saunders said she agrees that it's important to look at immigration from another standpoint.

“It’s important for those of us who are not immigrants to recognize the challenges of leaving your life and starting a new life in a different place,” Saunders said.

The co-hosts developed this event to help get rid of some of the negative stigma against immigrants.

“Living in a new location and a new country in a new culture is very challenging, and despite that, immigrants bring a lot of contributions, a lot of assets, a lot of different perspectives. A lot of innovation. The research shows us that immigrants are assets to our communities,” Saunders said.

Tomiwa Shonekan, immigrant panelist speaker, said, “The United States is a country of immigrants. Immigration brings diversity to the United States, so we have to be willing to engage immigrants at different levels without making it difficult on the system or on immigrants themselves. The immigration laws are structured to eliminate rather than to include.”

According to the center for immigration studies, "An analysis of new government data by the Center for Immigration Studies shows more than three million new legal and illegal immigrants settled in the United States in 2014 and 2015 — a 39 percent increase over the prior two years. The number of legal and illegal immigrants settling in the country is now higher than before the 2007 recession and may match the level in 2000 and 2001. Immigration from other countries has offset a decline in immigration from Mexico."