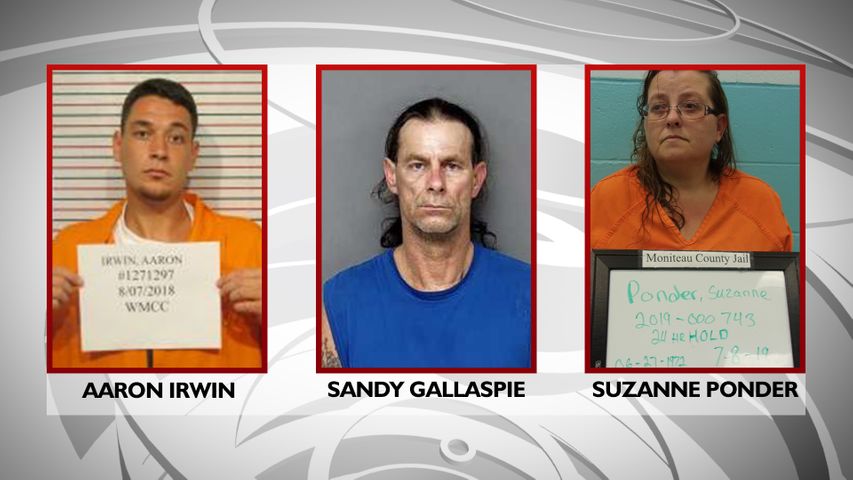 MONITEAU COUNTY - Two murder cases have had significant developments in the past few weeks, and one woman knows the alleged killers in both cases.

Amanda Ponder was friends with Aaron Irwin since the ninth grade. Now, Irwin has been charged with first-degree murder for the death of Cody Thirlwall in 2014.

According to a probable cause statement, Irwin tracked down Thirlwall after he had "ripped him off on a drug deal."

Irwin told witnesses he wanted to find Thirlwall so that he could "put him in a ditch." One witness said Irwin told her he took Thirlwall to a remote place where no one would find him, the court documents said.

Thirlwall's remains were later found on private property near Stone Creek Road near Enon, Missouri. The complaint filed in the Moniteau County Circuit Court alleges that Irwin killed Thirlwall by "stabbing and cutting him with a knife."

Amanda Ponder also has connections to a case involving an abandoned corpse.

She is the niece of Suzanne Ponder, who, along with her ex-boyfriend Sandy Gallaspie, was charged with first-degree murder on Tuesday in the 2015 death of Suzanne Ponder's ex-husband Jon Williams.

Suzanne Ponder was arrested in late June and Gallaspie on July 6. Gallaspie has confessed to shooting and killing Williams, investigators said, but Suzanne Ponder has not.

The victims in each case were from Jefferson City.

Amanda Ponder said she was shocked when she heard the allegations against Irwin, since she always knew him as a kind and caring person.

"He's always been super respectful, super nice, like he always looked out for me," she said. "I don't think that he could ever harm anybody like that. Like that just seems a bit far-fetched to me."

However, she said, she has not spoken to Irwin in two years.

"He's always kind of run around with some rougher crowds," she said.

When Amanda Ponder was sent a link on Facebook about the allegations, she was stunned.

She said she thought, "This can't be the same guy that I knew, I mean I know people change but..."

However, she didn't feel the same about her aunt, Suzanne Ponder.

"I'm not shocked that she did it," Amanda Ponder said.

She said, for as long as she can remember, her aunt was heavily involved in drugs. Amanda Ponder believes, between drug use and a love triangle between Jon Williams and Sandy Gallaspie, the results were deadly.

The probable cause statement in the investigation said Gallaspie became angry after Williams had "made a pass" at Suzanne Ponder. Williams reportedly grabbed Gallaspie's arm, and that's when the gun went off. Gallaspie told police he left Williams's body in a wooded area and returned later to bury it, investigators said.

Amanda Ponder said she hasn't spoken to her aunt's side of the family in three years because of the prevalent drug use.

Moniteau County Sheriff Tony Wheatley said the developments in both cases were, in part, due to cooperation between the his team and the Cole County Sheriff's Office.