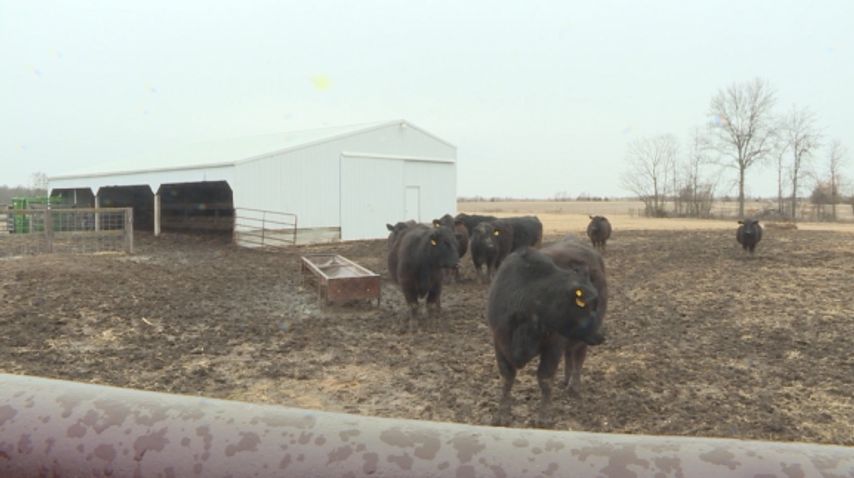 HOLLIDAY - The sporadic weather is common in Missouri, but a report done by the MU Veterinary Medical Diagnostic Laboratory in Columbia, said farmers need to watch what they feed their livestock.

The report said that in February more than 200 cows in Missouri have died from nitrate poisoning. Dr. Tim Evans, a section head at MU Veterinary Medical Diagnostic Laboratory, said that number is close to 300 now after six weeks.

Nitrogen goes into the feed, like hay, which is normally good for the cow’s digestions. However, when there’s too much rain or drought, more nitrate accumulates in the plant and stays there.

When livestock, like cows, eat that hay, they actually overconsume nitrite in their digestive system. That nitrite goes into the bloodstream and makes it so the blood is unable to transport oxygen. The cows die eventually from a lack of oxygen.

This happens when there is unusual weather. The report said if there is too much rain turned to too much drought, or hot weather turned very cold, it will affect the biology of plant growth. The drought also meant a lot of hay shortages, which also had an effect.

“What’s going on is for about the last, maybe the last 18 months to 24 months, we’ve had less than adequate forage for our cattle,” Evans said.  “We run out of forage, we end up getting poor quality forage to feed the animals and then what happens, some of that poor forage is going to be stemmier, it’s going to have higher concentrations of nitrate in it.”

Ed Mitchell, a farmer in Holliday, Missouri, said he knows this problem well.

“The spring of the year seems to me more often we start having these issues,” Mitchell said. “Because we are getting to the end of the season, so sometimes the hay that we’re feeding this time of year isn’t as good a quality as the hay we fed at the beginning of the season.”

Mitchell said it’s important to give his cow’s good forage.

Luckily, nitrate is not a problem for Mitchell.

“We know our hay when we bale it, we don’t add extra fertilizers and things on it that could cause a nitrate issue,” Mitchell said.

For farmers who use fertilizer or have to buy their hay elsewhere, it’s something experts said they must watch out for by getting their hay tested.

Evans said that the problem is that some farmers only test one bale.

Mitchell said farmers who buy their hay should also monitor their cows.

“Watch your livestock watch your cows, your calves, if they’re holding their head down, if they’re away from the others, you want to check them to make sure they’re not sick,” Mitchell said.

If they already see problems with their livestock, he said farmers should see a veterinarian immediately and to examine the animals to see the nitrate levels.