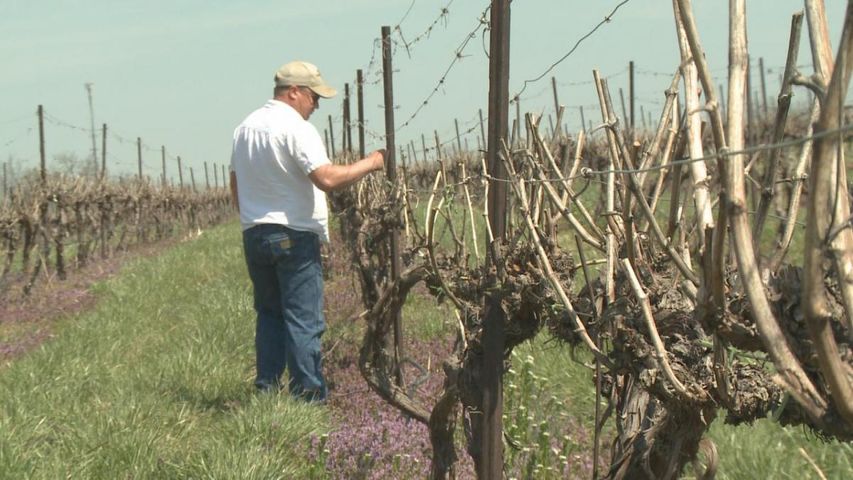 ROCHEPORT - Freezing temperatures in early April threatened to damage Mid-Missouri vineyards even more than winter already has, but one grape grower said the harsh winter actually helped protect his vines from the recent spring freeze and is confident consumers will not suffer this season.

Larry Lopez is the Vineyard Manager for Les Bourgeois Vineyards. He said the extreme winter set back the bud break of the grapes, so the recent freeze didn't damage them.

"The cold weather that we've been having all winter set back the bud break that we could've had," Lopez said. "If we did have that bud break then the freeze we had would've hurt, so the winter actually helped us in a way."

Horticulture specialist Patrick Byers said the vines were able to tolerate the cold temperatures because of the stage of development they were in at the time.

"The buds we're beginning to develop, but the shoots were definitely not out yet so the vines were able to tolerate fairly cold temperatures," Byers said. "Everything depends on the stage of the growth of the vine and the absolute temperature."

Although the long winter protected Mid-Missouri grape vines from the recent freeze, Lopez said it still took a toll on the vines.

"This year we've had a lot of cold snaps, or long spells of cold weather, and it's really put a hard hit on our plants," Lopez said. "The vines are only temperature ready for certain degrees below freezing, and we've had so many consecutive days below freezing and below zero temperatures that it has been really hard on the grape vines."

Lopez said he expects a large loss of crop this season.

"We've actually lost a lot of our primary buds on these grapevines, so we will still have our secondary and tertiary buds, but the primary bud on a lot of these vineyards are already burnt off due to the hard freeze."

Lopez said he is confident his consumers won't suffer because they have a big inventory and will still produce a large amount of secondary buds.

"We'll get the grapes and the wine made one way or another because we have so much inventory and stock now," Lopez said. "It is going to impact us a little bit, but I don't think the consumers will really be hurt by this."

He said he thinks smaller vineyards in Mid-Missouri will suffer more severely from the loss.

"It's really going to hit them hard," Lopez said. "It's going to be a loss to some of the individual, non commercial wineries or vineyards; a complete loss to them. "

Byers said the amount of crop produced on a secondary bud depends on the type of grape.

He said it is still too early to know if the crop of grapes in Missouri will suffer this season.

"We don't have a clear picture of what the crop is going to look like and that won't be evident for probably several more weeks," Byers said.

Byers said the potential loss of crop this season could affect the price consumers pay and could force the Missouri Department of Agriculture to modify the percentage of grapes in a bottle of wine allowed to be from somewhere outside the state.

"There's several scenarios that could play out," Byers said. "One is a higher price paid for the grape crop. Secondly, in the event of a year where we have a short grape crop, or we don't have a sufficient grape crop to meet needs then the Department of Agriculture's requirements can be adjusted to allow a higher percentage of grapes in a bottle of wine to come from outside the state."

Ultimately Byers said he thinks Missouri grape-growers will still be able to produce a good supply of wine despite the harsh winter setbacks.

"We'll have an adequate supply of Missouri wine and of course it will be good quality," Byers said. "The only difference is some of those grapes may be forced from outside of Missouri."