Experts: There's no such thing as the 'safest' car seat 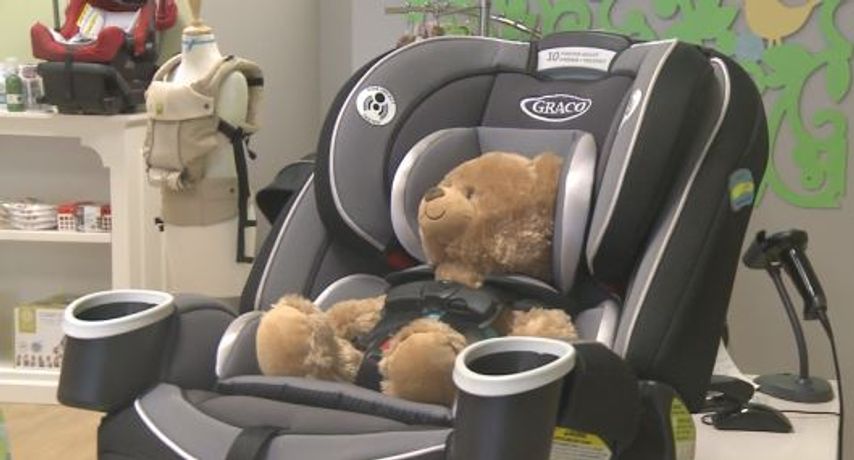 COLUMBIA - Securing kids properly in their car seats is a hot topic among parents and car safety seat technicians.  A week in September is specially dedicated to informing parents and care givers about how to secured kids in their seats.

Kamille Dy and Molly Carmichael are parents with a passion for car seat safety.

"I have a son and I did a lot of research, and working in this business I always have questions so I think it's for me to be a good resource for our parents," Carmichael said.

"Mainly because of my son, he's very important and if he got in a crash or something were to happen to him, obviously I would feel awful and I would never forgive myself," Dy said.

Carmichael owns a baby store in Columbia, Go Baby Go, and Dy is a child passenger safety technician. Both know how to keep kids safe on the road.

National Child Passenger Safety Week means a lot to them. Dy and Carmichael love sharing their knowledge. As a certified technician, Dy helps families at their home in setting up a car seat, and Carmichael makes sure each family goes home with the right fit for them.

Parents often ask Dy to recommend the safest car seats for kids, but the answer is not a certain brand.

"Every car seat is actually going to be safe for your baby, there's no safest car seat out there, they all pass the same safety tests," Dy said. "The best car seat is going to be the one that fits your baby or your kid properly, one that you can get a good install with and that works with your vehicle and the other passengers, and your budget is probably the biggest one for a lot of parents."

Dy said there are cheaper options that are just as safe as the more expensive ones, but the important thing is to not buy used car seats because car seats have expiration dates.

"They usually have a date on them somewhere," she said. "Not every car seat is going to be expired at the same time."

The damages an expired car seat can cause outweigh going with the cheaper option.

"Basically over time the plastic will wear down, technology advances, parts aren't available for that car seat anymore, and stuff like that. So, it's very important people pay attention to those expiration dates and take them very seriously, because it's your child's life," Dy said.

Carmichael said now there are car seats that offer a load leg feature which keeps car seat from unwanted movement. It also takes the brunt of the force if there is a head-on impact.

"So you just don't want your child to move around if you're ever in an accident," she said.

Carmichael said this option has only been available in the U.S. for the past three years.

Carmichael always recommends parents that walk in to her store watch YouTube videos of car seat installations and get in contact with a certified child passenger safety technician to familiarize themselves with the process, even before their baby is born.

"Use dolls and stuffed animals, get yourself prepared and ready and knowledgeable," she said.

Carmichael said the best car seat is the one that best fits the parents needs, whether it be a car seat that you leave in the car, or one you change as the children grows.

Parents often think once they latch or strap the car seat in their job is done, but the checks don't stop there.

MoDOT technician: 'Too many children dying in car crashes'

MoDOT released a news release on the number of children killed or injured in car crashes. Among the seventeen victims last year, 31 percent of the children were not safely secured in the vehicle. Although it is a small number, Carrie Wolken, child passenger safety technician with the traffic and highway safety division of MODOT, said it is still too many.

"They stay pretty stagnant across the board when it comes to child passenger safety. Of course we have too many children dying in car crashes. It's an easy fix, just put your kid in an appropriate car seat and you won't have any problems typically," she said. "But that's about a normal number, unfortunately."

Wolken wanted to remind parents that it is important to keep their child in a car seat, because one, it is a primary offense, and two, it can keep them safe.

Wolken shared how to be sure when your child is ready to use seatbelts.

"The seatbelt should fit across the collarbone, not up on the neck or down on the arm. And across the hips, not up on the belly or anything higher than across the hips or laying on the top of their thighs," she said. "Another way to tell if your child is ready to come out of the booster seat and just sit on the vehicle seat is that if their knees bend naturally over the front of the seat."

Darla Atkins, a child passenger safety technician with Columbia Fire Department, said there is still room for improvement, but the development in laws and seatbelt technology have been immense in her 14 years as a certified technician.

"Especially with the recent changes in the law," she said. "They brought out the booster seat law which really helped, what also helped is other safety advocates."

"The new recommendations out by The American Academy of Pediatrics, they recommend your child be at least two years of age before putting them forward facing, or to whatever height and weight limit your car seat is," she said.

The danger occurs when parents fasten both the latch and the seat belt buckle feature at the same time.

"A lot of times people think they have to use everything that comes with the car seat, so they'll put both of that to install the car seat. They actually recommend only using one system because one actually interferes with the safety of the other, unless the car seat manufacturer specifies you can use both of them," Atkins said.

Dy says parents aren't aware of the dangers after market products have on car seats. Most of the additional accessories you purchase to keep your child safer, like additional strap covers or protective mats, aren't car crash tested. The ones to purchase should come directly from the car seat manufacturer of the specific car seat.

Additional advice from Dy in welcoming the winter season, don't buckle your child in a winter coat.

"Whenever you're putting your kid in with the coat, most of the time you're going to have to loosen those straps up. So when you're in a crash or a sudden stop that coat is going to compress and the straps will be loose enough where they could fly out of their car seat and there's too much movement," Dy said.

She recommends other ways to keep your child safe and warm.

"A good way to keep them warm is to layer their clothes, pre-heat your car, bring a blanket, or you can even put on their coat backwards after they're buckled in the seat," she said.

Child seat check-ups can be found around the state at these locations.