Fallen Firefighter Remembered as Hero, Cowboy and Man of Honor 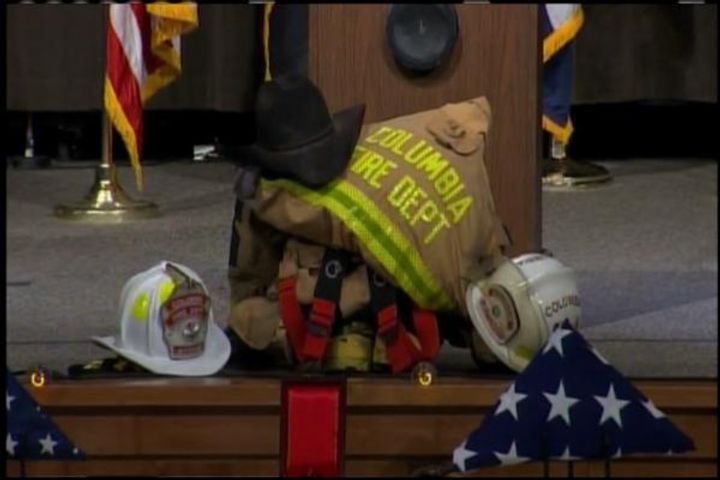 COLUMBIA - A black cowboy hat sat atop a well-worn firefighter's jacket flanked by two scuffed helmets at the front of The Crossing church Thursday. The silent tribute spoke volumes about the life of Lt. Bruce Britt, who died in an apartment collapse Feb. 22.

"We mourn for the family of firefighters who have lost a brother," said Columbia Mayor Bob McDavid. "Lt. Bruce Britt is a hero we will never forget."

Britt's memorial service began with bagpipes playing as firefighters holding axes filed down the aisles to stand before a stage filled with flowers. A photo of Britt in uniform filled monitors above. Church cameras showed one first responder, bent forward with clasped hands, mouthing a whispered prayer.

The morning started with a solemn procession through the streets of Columbia. A long line of firetrucks, ambulances and police vehicles rolled with lights flashing and flags waving along a route that stretched nearly six miles.

A "wall of blue" greeted service goers as firefighters in full dress uniform lined the walkway. A giant U.S. flag was draped between two firetrucks nearby.

Columbia Fire Chief Charles Witt said Britt would be "extremely frustrated" by the "hoopla going on" in his honor.

"Bruce was a cowboy at heart, wearing boots and hat before he could walk. He enjoyed riding horses, working at the Callaway Sale Barn and raising his daughter Stormy to be a true cowgirl."

Bill Markgraf, a former chief, remembered his first meeting with Britt many years ago.

"He had a cowboy hat, cowboy vest, he had cowboy boots he even had a cowboy belt buckle. See you couldn't help but think, 'what's this cowboy want?' And he said 'chief, I want to become a part of the Columbia Fire Department.'"

Markgraf said he had no idea at that time the impact Britt would have over the years.

Britt died working on the scene of a structural collapse at University Village Apartments. An eyewitness reported Britt was walking on a partially collapsed, second story balcony when it fell in on him.

His obituary reads: "Bruce was a good man with a kind heart who would help anyone in need and he stood for the truth. He had an incredible, gentle spirit behind the rough exterior and was a fierce defender of family and friends. All kids should be lucky enough to grow up with such a man in their life, and any adult would be blessed to have such a brother or friend."

Below is full video of the procession and memorial service as it aired on KOMU 8 News.