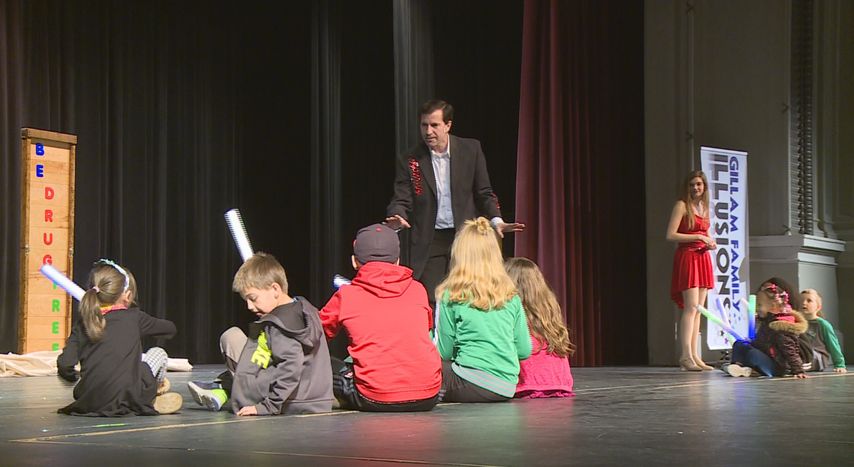 JEFFERSON CITY - At least 100 parents and children gathered at the Miller Performance Center on Saturday for an afternoon filled with magic to benefit the Council for Drug Free Youth.

The main event featured Gillam Family Illusions who performed a variety of magic tricks and comedic acts. All funds raised from the 10th annual magic show go toward CDFY's programs that educate youth on drug and alcohol prevention.

Both old and new fans came to support CDFY and the Gillam's entertainment. One audience member, Shelby Christian, said she had Aaron Gillam as a teacher in high school and came to support his family.

"We had a blast in his classroom so it's fun to see him on stage," Christian said. "I think my favorite part about it is hearing all the kiddos react to what they see."

The Gillam family has been involved with the council for over ten years. The matriarch of the family, Denise Gillam, has directed one of its most well-known programs, Safety Kids for the past ten years.

Judy Brooks, one of the founders of CDFY, said this event helps show youth that they can have substance-free fun. She said one of the council's goals is for children to learn how to say no to substances and influence their peers to do the same.

"You just don't realize the temptation that these kids have and you don't know some of the effects while they are happening," Brooks said.

The council has 13 different programs for children from kindergarten to high school. Brooks said if it weren't for fundraisers like the magic show, they wouldn't be able to run these programs. CDFY hosts three main events throughout the year to fund its programs.

CDFY targets educating children about the dangers of alcohol, tobacco, marijuana and prescription drug usage. Brooks said it is currently working to expand its programs to Osage County.