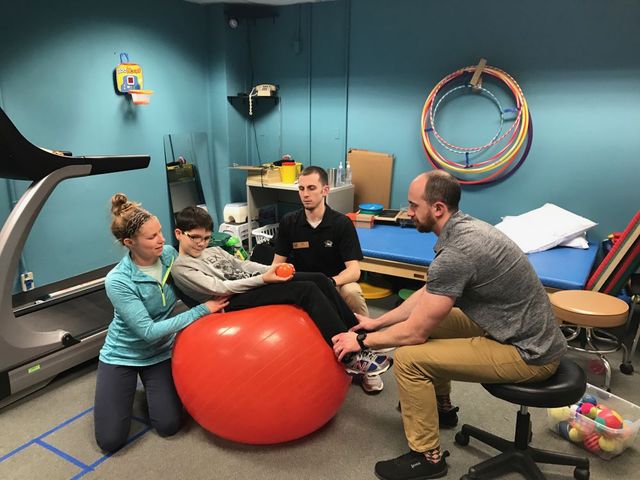 COLUMBIA - From speech to occupational, behavioral and physical therapy and more, families who have members with developmental disabilities often spend multiple days each week in some type of therapy, and the costs add up.

Some insurance policies only cover up to 20 therapy sessions a year, while others refuse to cover any therapies for developmental disabilities.

This means that after 20 session in total, families are responsible for coming up with the remainder of the money to cover therapy costs on their own.

But some Missouri families are fed up and supporting a House bill that would make the insurance companies more responsible for their bills.

“I don’t have an immediate family with a disability. But long ago, I learned to put myself in other people’s shoes. I learned to empathize. That is why it was so important for me to back this,” Basye said.

It assesses families' needs and then provides financial help of up to $7,500 per year per family

Robyn Kaufman, the executive director of the program, said she thinks that the legislation is important and would be very helpful to families.

“These therapy session, no matter what they are, help these children. We do what we can to assist these families, but more insurance coverage would definitely help them as well,” Kauffman said.

There are restrictions to the program's resources.

One major restriction is that students have to be enrolled in Columbia Public Schools.

This eliminates some of the families from getting resources because their children can’t function in public school settings.

One Columbia mother, Molly Myers has a son born without the middle part of his brain. He suffers from Partial Agenesis of the Corpus Callosum. She's had to deal with the public school mandate a couple of times.

“There were two years we didn’t qualify for the $7,500 because public school just wasn’t working for us,” Myers said.

Her son also attends a preschool on the University of Missouri’s campus.

That preschool is geared toward children with disabilities, but falls into the Boone County Family Resources' restrictions. Insurance also doesn't cover it, so her family pays $765 for fall and spring semesters. Summer is half priced.

Another family, who has a son born with a genetic disorder, showed KOMU 8 News just what an out-of-pocket bill looks like.

“After we have run out of insurance visits and all our BCFR funds have been exhausted, we pay about $50 every time he must go to a speech therapy session,” Robyn Schelp said.

Kelly Stephens, a therapist who works on MU’s campus and works with several of these children, said therapy is important because it helps them in the long run.

“Children who get therapy before they are three years old have a better chance of not needing it when they are older. It helps with behavior and social skills. Some of these children have siblings and these therapies can help them better adapt to their environments,” Stephens said.

Janessa Gaughan has a 4-year-old daughter that was diagnosed with autism in September of 2016, and her family is in the beginning stages of figuring out what her daughter's process is going to look like. She is currently a stay-at-home mom and hopes the bills don't become so outrageous that she has to find a job outside the home.

Ashley Perkins has a son that was born with a heart defect. He has had an open-heart surgery and will have another in the coming months. She has to balance everyday life and taking care of her son.

Jacque Sample has spearheaded the effort to support the legislation. She has a son on the autism spectrum. Her son is 13, and struggles with behavioral issues. She also has another son who does not have disabilities, and, as a mother, she works to give both of her children enough of her time and attention.

The proposed bill has been assigned to the Senate Health and Pensions committee.

The organizers are still waiting for a House assignment.

You can access the Boone County Family Resources annual report to see how the program allocates its money each year.

Below are various bills received by families of children with developmental disabilities showing possible out-of-pocket costs.