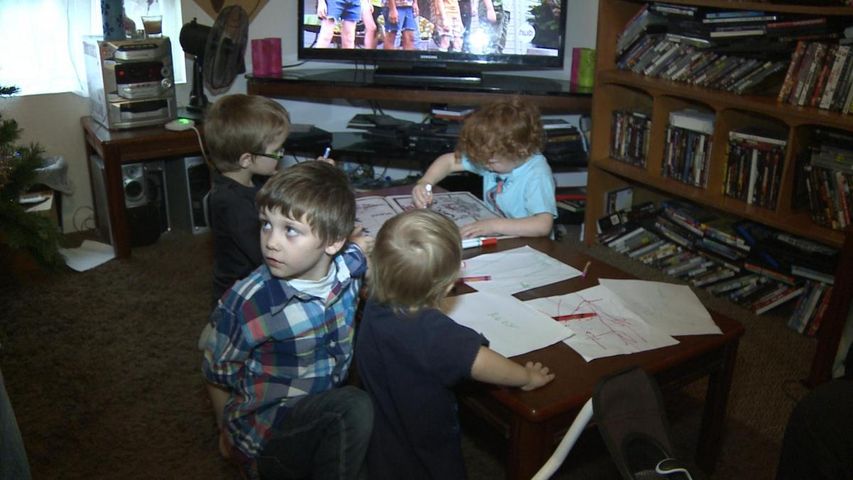 COLUMBIA - There isn't any type of family immune to the hardships of poverty. (See resources for families in need.)

KOMU 8 News asked its viewers who are poor or near poor to share how they believe the face of poverty has changed. We received 120 responses. Three invited us to meet with them as they shared intimate details of their lives, and their finances.

A Christmas tree stands guard in the living of Eric Wright's Columbia home. There, his four boys and his fiance spent a Sunday afternoon coloring and watching their favorite episodes of cartoons, again and again. Shiny, blue ornaments hung as the boys sprawled across the floor coloring.

Despite their young ages (the boys range from one to eight), Wright said he's worked to teach them what the holidays really mean.

"Its not all about materials things, getting presents, it's about being happy with your family and having a roof on your head."

The boys likely won't receive presents this year. Wright said with three months of rent due, on top of his other bills, it's just not in the budget this year.

"Our first priority isn't going out and buying a set of Lego's," he said.

Wright recently completed training for a sales job. He is hoping to find work as soon as possible. Despite the stress that is inevitable when both parents are unemployed, Wright and his fiance try to keep the adult conversations between themselves.

"Kids are pretty easy to accommodate and keep happy. It's not a kids place to worry about bills. They don't know any better," Wright said.

"Electricity really doesn't matter if you don't have a roof on your head," he said "I guess the roof is the most important right now."

But Wright isn't alone. The Missouri Association for Community Action outlines the state's most current poverty statistics in its 2014 State of the State Poverty Report. It says, in Boone County, one in every five households qualify as "in poverty" by federally set guidelines. In Callaway, the number drops slightly at 15 percent.

John Huckstep lives in Fulton and uses city resources on a day-to-day basis. He eats regularly at the John Harris Community Center. He said he's found his family there.

"I know I've got friends here and I know if I needed help, they'd help me," he said.

Huckstep worked in law enforcement early in his life, but health issues forced him to leave his job.

He was once married. His wife and their son have both moved on, but Huckstep said he's found a family through the soup kitchen. There, he and the other attendants support each other through difficult financial times.

Many of the people who responded to our survey expressed how important it is to them to lean on each other and be open about financial troubles.

Dena McMasters said she relies on her children and sisters who live nearby. She shares her home with her dog, Bella. Seven years ago, she worked up the courage to leave a physically and mentally abusive husband, she said.

"I went from a pretty nice lifestyle, working as a compliance officer, to literally scrounging things from flea markets and asking friends for dishes I could have if they were going to throw them away," she said.

She said she feared for her life and had to get away. Her ex-husband is currently incarcerated for unrelated offenses.

Resources are available for those living at or near poverty, including organizations serving people who don't qualify for government assistance:

Voluntary Action Committee - it's mission is "To help low-income individuals and families bridge the gaps between crisis and stability and improve quality of life in Boone County."

Heart of Missouri United Way - It's stated goal is to mobilize "the caring power of community resources to serve people in need in mid-Missouri."

Missouri Association for Community Action - Its website provides a long list of resources and includes a map of where to get help.

Below are our full interviews with Tim Rich, Executive Director at the United Way for the mid-Missouri area, and Dr. Troy Hogg, Principal at Benton Elementary School.