Family and Friends Come Out to Support the Schwab Family 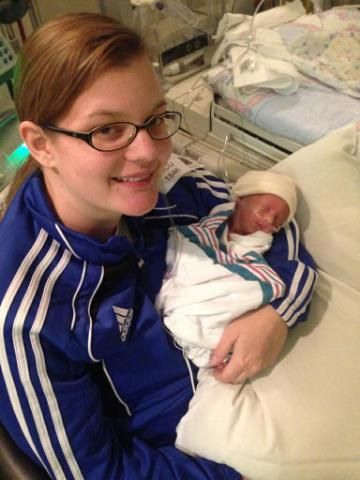 COLUMBIA - Friends and family of Tyler and Liz Schwab came out to raise money for the family and their daughter, Harper Schwab, Saturday afternoon.

The event began at 11 a.m. at the Prairie Grove Shotgun Sports in Columbia and there were different activities for people to participate in throughout the afternoon.

There were shooting games, food and drinks for sale and a silent auction all throughout the event.

Liz Schwab gave birth to twins on Christmas Day but only one survived. Evelyn Schwab was a stillborn baby while Harper Schwab has Hypoplastic Left Heart Syndrome. The syndrome is a heart defect that is present at birth where the left side of the heart isn't developed completely.

Arlene Schwab is Tyler Schwab's mom and she says Harper, who is only 3 lbs. and 4 oz. right now, has already had a surgery last Thursday.

"She will have to have three operations and what that is, is the operation is to correct the flow of blood to the heart," Schwab said. "She'll have these operations up until age two."

This has been a hard time for the family, but she says her son and her daughter-in-law are handling it very well. "It's been not as bad as I thought it would be because of the support of family and friends," said Schwab. "They've been absolutely wonderful including this benefit they're putting on today they're very thankful."

But as a grandmother, she had the hardest time when only one of the twin girls survived.

"I think the most difficult was when Evelyn, her twin passed away," said Schwab. "We knew it was going to happen, but when it does happen you're not quite prepared, but you have to keep going on for Harper and everyone's been wonderful."

Her family doesn't have any set plans of having more fundraisers, but Schwab says they have great relatives and friends who may want to hold more for Harper and her parents in the future.