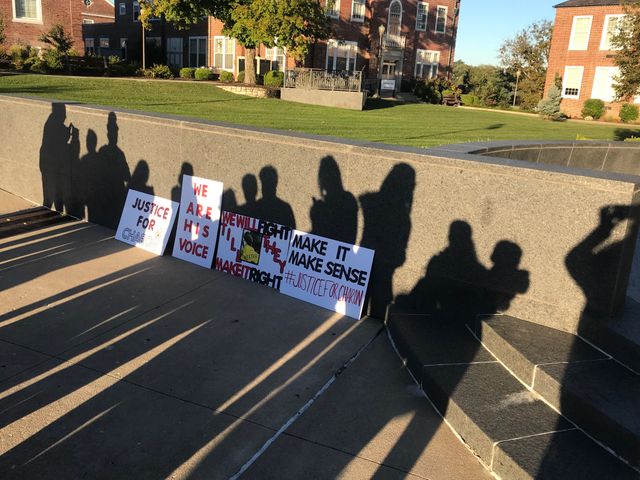 About an hour before, Session's friends and family marched from Lincoln University to the Cole County Courthouse in protest of the judge's decision that allowed Chism to bond out of jail last month.

Chism pleaded not guilty and Judge Joyce did not revoke his bond.

Session's mother, Schfonia, wants answers to explain why Joyce made the decision to lower Chism's bond.

"I'm just not understanding where her thought process was. It's just not sitting well with my soul, there's something wrong with this. Me as his mother I want justice.  He should be behind bars he should be locked up. My son is confined to a box for the rest of his life, my life. So how is it fair that he gets to be with his family that's not fair," Schfonia said.

Jaylin Jones, a friend of Charon, feels Joyce is not taking this case seriously, and is not thinking about the victim. He shared his thoughts after sitting in on the hearing.

"Chism pleaded not guilty, even after his first statement when he admitted in his first statement that he had did it. Probably recommendation of his lawyer. However, the fact is, is that now you're lying so that you can get a better sentence for yourself," Jones said.

Douglas Hennon, one of Chism's lawyers, gave us this statement:

"Threats had been communicated to my client. The alleged victim showed up on Mr. Chism's door step, where he resided with his mother at 3 am. He refused to leave despite repeated requests that he do so. The specific details will be revealed in due course, but this is a case of self defense and defense family, not a case of first degree murder," Hennon said.

The next hearing will be Wednesday, December 5th.