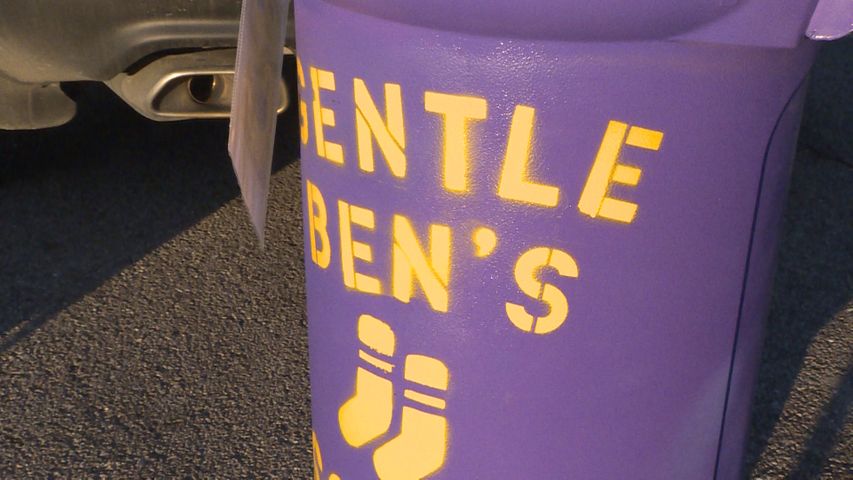 COLUMBIA - Gentle Ben's Socks for the Homeless is set to donate over 3,000 pairs of socks to shelters across mid-Missouri Monday.

The non-profit organization is run by Janet and Edward Miller out of California.

The Millers started the organization in honor of their late son, Ben, who died unexpectedly of a brain aneurysm in August of 2017.

"We were absolutely grief stricken for the first couple months," Janet said. "We decided we can either let it destroy us or we can do something and have something positive come out of his life."

The Millers said they wanted to do something meaningful that Ben would have liked, so they chose to donate one of his favorite things: new socks.

"He always said that he wanted to get rich enough so that he would never have to wear the same pair of socks twice," Janet said.

Janet characterized Ben as someone who was generous and humble who never wanted any recognition for his good deeds.

"He really liked helping people, and he never really wanted credit for helping people," Janet said. "We thought that was the perfect way to honor him."

Janet said helping the homeless was their goal because socks are the most-needed and least-donated item for homeless people.

"I think that sometimes they're the forgotten people," Janet said. "We felt like it was just an area that would have a lot of impact, and we thought that it would be something that Ben would like."

Gentle Ben's Socks for the Homeless has been operating for two years.

In its first year, the Millers set the goal to collect 500 pairs of socks. They collected 900.

Coming into the second year, the Millers wanted to double the amount of socks they collected. They started collecting socks earlier in the year and began putting out collection bins in California and Jefferson City.

The Millers said a lot of donations came from family and friends, but their efforts to grow the organization resulted in donations coming from strangers.

Janet said they had donations coming from all over the country, some in pairs of socks and some in money. The Millers said they used the money to buy more socks.

The Millers said socks will be donated to three places in Columbia: the Salvation Army, Phoenix Programs and Welcome Home.

They said they picked veterans organizations because Edward is a veteran.

"There's a lot of homeless veterans, and they need our help," Edward said. "They're just like any other homeless people. They just need our help, too."

The donation comes at a significant time. Sunday was Ben's birthday. He would've been 37.

"I did a little tribute, and I said 'Ben, you got your new socks. 3,100 people donated socks for you. Sorry you're not here to wear them,'" Janet said. "I can just see him shake his head. He'd be pleased. He'd be real pleased."