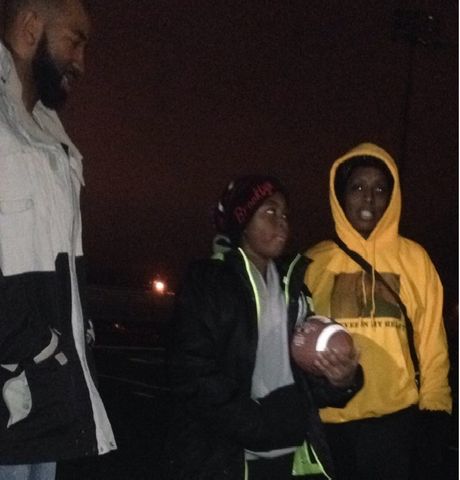 COLUMBIA - There was not a dry eye in the crowd that gathered to remember one of Columbia's own. People met at Hickman High School despite the weather to mourn the loss of a homicide victim Friday night.

Family, friends, and former teammates attended a second vigil for Rickie Dunn, a 40-year-old Columbia resident who died Sunday. The first vigil was Thursday night. Those who attended said the vigil is to support such a great man.

The victims sister, Pamela Dunn-Williams said the rain won't stop them from coming together to mourn the loss.

"He was a very humble guy, great father, and loved his community. It's the love of my brother that is bringing us here," Dunn-Williams said.

Everyone gathered on Hickman's football field because Dunn was a player back in the day. A football was signed to support Dunn with the saying "Rickie 21 #justice." His son was given the choice to place the ball on the 50-yard line or keep it. He chose to keep the ball to remember his dad.

Everyone's biggest concern was to see justice. Police are still investigating and have no suspects yet.

The brother of the victim, Julius Dunn said the police haven't tried to contact them and that his family would like to see justice.

"I just don't want the city to let my brother down. If someone knows please talk, if you know someone who knows please get them to talk. He was a great man for the city and is special to everyone here," Dunn said.

He described his brother as a protector, loving, and caring.

The funeral for Rickie Dunn will be Saturday.