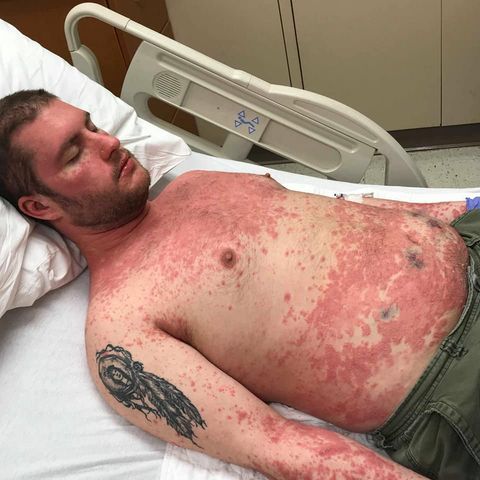 CALIFORNIA – A California, Missouri, family is asking the community for help to pay for treatment for a man who has not one or two, but five types of psoriasis. One is incredibly rare and can be deadly.

He's had to go to St. Louis several times for treatments, but his sister says the doctors there haven't found a successful treatment plan yet.

"Most of the time his skin is raw and peeling off and there's not much you can put on that," Karpowecz's sister, Haley Weathers, said. "Sometimes he has some creams he can put on, but even those haven't been real effective for him."

The Karpowecz family has scheduled an appointment with the Mayo Clinic in Minnesota for April 30. Weathers says they were lucky to get an appointment so soon.

However, getting an appointment is one thing. Paying for it is another. Weathers started a GoFundMe page in order to raise funds for the treatments Karpowecz would need. As of Wednesday, it is halfway to its initial goal of $1,000, and it's trending on the website. The family has since raised the goal to $5,000.

"The community support has been incredible," Weathers said. "The shares we've gotten on Facebook, the prayers we've gotten, we can definitely feel that they're working. Getting his appointment at the end of the month, obviously, is kind of a miracle in itself."

The money would also be used to pay for items like groceries, because Karpowecz's condition has put him out of work for the moment. It's keeping him from doing all sorts of other things, too.

"Swimming is his favorite thing to do, he loves to swim," Weathers said. "He loves to cook. He loves to be with his daughter, so he's unable to do any of that right now."

According to the National Psoriasis Foundation, plaque psoriasis is the most common form of psoriasis. It appears as raised, red patches covered with a silvery white buildup of dead skin cells or scale. The patches are very itchy and painful.

Guttate psoriasis is the second most common form of the disease. The bumps it forms aren't as big as the ones from plaque psoriasis.

Inverse psoriasis appears in the folds of the body, like the armpit or areas in elbows and knees. It has no scales, but becomes easily irritated due to moisture.

Erythrodermic psoriasis is one of the rare types of psoriasis affecting Karpowecz. It can also be life-threatening. It occurs in only 3 percent of people with psoriasis. It can cause infections, pneumonia and congestive heart failure.

Different types of psoriasis affect different age groups, and they all have different symptons and treatments.

All of these types of psoriasis can occur simultaneously, as is seen with Karpowecz.