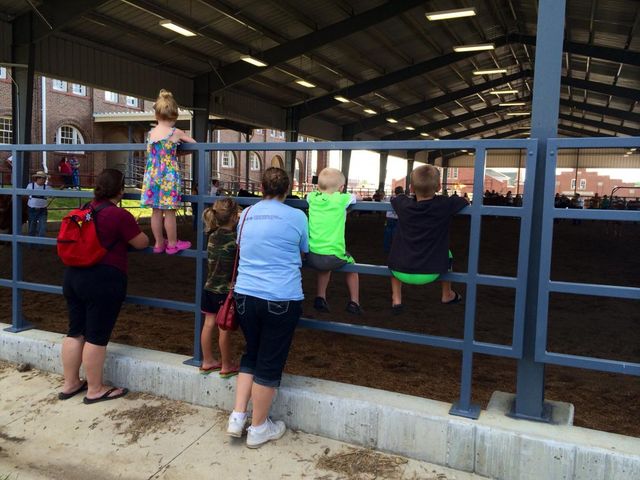 SEDALIA - Thousands of Missourians flooded the fairgrounds in Sedalia Thursday for the first day of the Missouri State Fair.

"I really liked looking through the sheep barn. My family has sheep so it was really interesting to see all the sheep there," Fritz said. She said she's been coming to the State Fair her whole life.

"My grandparents are from here so we come every year." She said she thinks this year marks 19 fairs for her family.

"There's a lot of different types of people, it's really cool," she said.

Ron and Connie McGilvray watched competitors show Gelbvieh cattle Thursday afternoon. The couple said they come to the fair each year, especially to watch their 29-year-old daughter show Angus cattle. Ron McGilvray said he remembered coming to the State Fair as a little kid in 4-H. He raised pigs as a member and now farms for a living in northern Missouri.

"You come to the State Fair and it's a kind of reunion, here you meet up again," he said. " In the ring you compete against each other, but afterwards we all sit around."

McGilvray said the fair taught him, and his daughters, not only how to win, but how to lose as well.

The theme of the 2014 is "Harvest the Fun." Fair organizers said they want to highlight the work being done by Missouri farmers and showcase their livestock and field crops. Nearly 30,000 entries are expected at this year's fair with more than 4,000 Future Farmers of America and 4-H members scheduled to participate.

"We have some great county fairs in Missouri, but the state fair is a culmination of the efforts that our young people and our exhibitors that have been working on throughout the year," Fordyce said.

While many came Thursday to see the livestock shows, people said they also came to see the Scotty McCreery show. The show began at 7:30 p.m. at the Pepsi Grandstand. Big acts including Sara Evans, Joe Nichols, Florida Georgia Line and Jake Owen play at the grandstand over the next ten days.

The fair runs through August 17 in Sedalia.