Fano Back With the Sanders Family 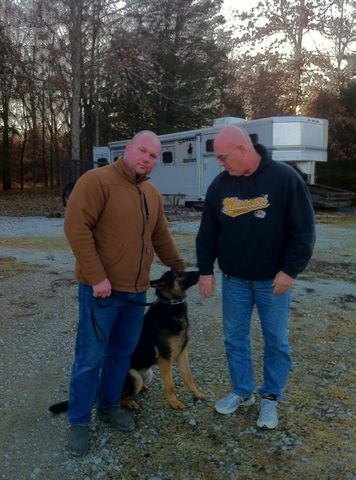 COLUMBIA - Fano, a police dog for former Columbia police officer Rob Sanders, is back with Sanders and his wife Amy Tuesday after months of fighting for the dog. Ashland police officer and friend of Sanders, Terry Toalson, bought Fano for $1 from the Clarence Police Department on Monday. Toalson said he learned from an unnamed source that the Clarence department was looking to sell Fano because the dog wasn't a good fit for the department.

Clarence Police Chief Raymond Barton told KOMU 8 he sold Fano to Toalson for $1 because he wasn't out to make any money off the dog. He said Fano was too aggressive for the small town, but wanted to make sure he found a good home. Toalson said he bought Fano from Clarence for personal use not for the Ashland Police Department. Barton confirmed those reasons for the purchase.

Toalson said his personal friendship with Sanders has strengthened since Sanders lost his job with the Columbia Police Department. Toalson said he supports Sanders "100 percent."

Amy Sanders posted this on Fano's fan Facebook page, "Fano is home!!!! Good friends and lots of prayers can do anything!! Thank you Terry Toalson." Amy Sanders told us she and Rob are happy about Fano's return.

Rob Sanders, was fired by Columbia Police Chief Ken Burton in 2011 for allegedly using excessive force against an prisoner. The dog became the center of controversy as Sanders and his wife urged the police department to sell Fano to them, but the city said the liability risks and chance of aggressive behavior from the dog were too risky.