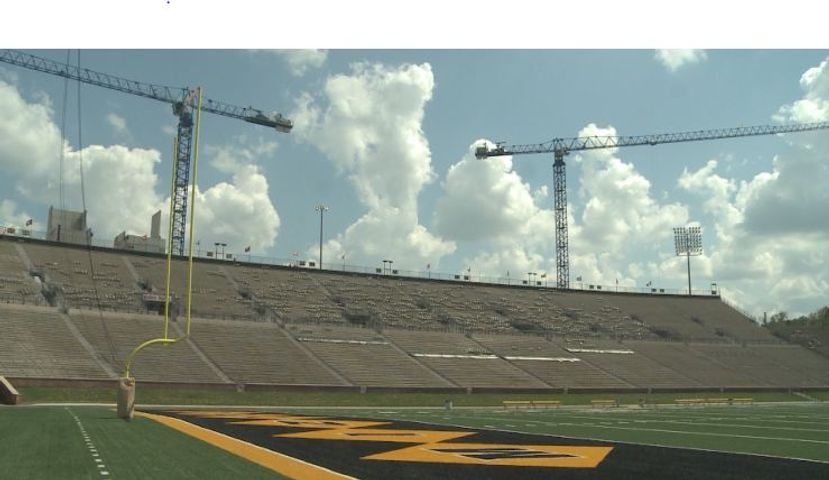 COLUMBIA - Memorial Stadium opened its gates to the masses on Saturday, despite the presence of ongoing construction.

Chad Moller, MU Football Director of Media Relations, told KOMU 8 News on Monday that everything scheduled to be completed before the first home game was finished.

"Any construction project seems to go up to the last minute," Moller said. "Everything will be as promised by the first game."

This phase of construction included moving the historic Rock M closer to the field and a newly-renovated press box and luxury suite tower on the west side of the stadium.

According to MU's official athletics site, workers moved the hill closer to the field during the summer in order to expand the north concourse area. The Rock M was stored away during the summer and then reconstructed with the same rocks in advance of the first home game.

While construction on the west side of the stadium has finished, the east side is still undergoing renovations. When completed, the east side structure will also have a new suite and club lounge tower. Officials anticipate the east side will not be finished until the start of the 2014 football season. While fans can still sit on the east side, they will not have access to parts of the concourse during games.

There are two large cranes that rise above the stadium, but they will not be moving during games. Fans will still have access to gates on the east side, but some areas are closed off for insurance reasons. Event staff said once fans walked past the fenced off construction, every gate was accessible.

Mizzou opened up their season with a win over Murray State 58-14. Fans get their next chance to see the revamped Memorial Stadium next Saturday when the Tigers take on Toledo at 2:30 p.m.