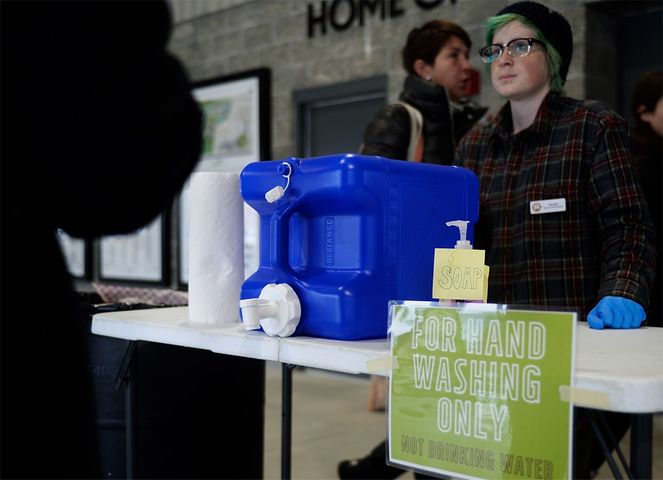 COLUMBIA - Not even the president declaring a national emergency could scare Mary Furness away from her semi-regular trips to the Columbia Farmers Market.

Furness has been frequenting the farmers market at the Columbia Agriculture Park for almost 30 years and said that concerns about COVID-19 would not stop her from attending.

"I cannot live in fear. I've been a lot of places. I've seen a lot of things. I've traveled all over the world. I cannot and I will not live in constant fear," Furness said.

As of Saturday, the farmers market implemented new regulations that would help limit the fear surrounding the event such as setting up a hand-washing center and requiring that latex gloves be worn by all vendors. Many of the activities that usually accompany the event were also cancelled, such as gardening workshops and live music.

Despite these precautions being taken and the determination of regular customers like Furness, there was a lower turnout than usual with close to 1,000 people. This turnout looks especially low compared to the previous Saturday, when approximately 1,500 people attended the market.

Corrina Smith, the executive director of the farmers market, recognized that it was a combination of weather and COVID-19 concerns that kept people from coming out.

After Missouri Governor Mike Parson announced a state of emergency to combat COVID-19 on Friday, the University of Missouri System made the decision to suspend all in-person classes at MU and other  UM System universities.

Like Furness, MU student Michaela Thomson considers visits to the farmers market part of her normal routine. Though she was disappointed by the university's announcement, she said maintaining that routine was vital to her and the community at large.

"I think they really will need support in this time. I hope that this doesn't affect the market too much, but I feel like it will, so it's important that I still come," Thomson said.

Jeannie Nobis, who has sold baked goods at the farmers market for the past 14 years, doesn't plan on leaving the market unless it is forced to close. She believes that the low turnout was primarily due to the rainy weather, and the virus is simply getting blown out of proportion.

But for precaution, customers are being encouraged to get the groceries they need and to leave. The farmers market also insisted that if a customer is not feeling well they should remain home and send a friend in their place.

Despite concerns around the virus, as of Saturday afternoon there are no confirmed cases of COVID-19 in Columbia.

Christelle Ilboudo, the medical director of MU Health Care Infection Control and Prevention, emphasizes that she does not think the city is at a point where people need to be quarantining themselves, but a point where the public should be cautious, especially of crowds.

The farmers market has never, in their 40 year history, cancelled for anything outside of dangerous weather conditions, such as ice and heavy snowfall. There is currently no plan for the farmers market to close, and it will only do so if absolutely necessary.

Smith believes that the public needs healthy food now more than ever, and that there are many benefits to shopping with a local producer.

"The amount of human contact to each product here is so much less than it is in any other food delivery," said Jim Thies, whose family run business has paired with the farmers market for the past 26 years. "I can't think of anything safer."

Many of the vendors were still receiving first-time customers, despite the low turnout.

"I'm optimistic that we're gonna have a bigger and better year than ever," said Thies.

To learn more about the Columbia Farmers Market, visit its website.