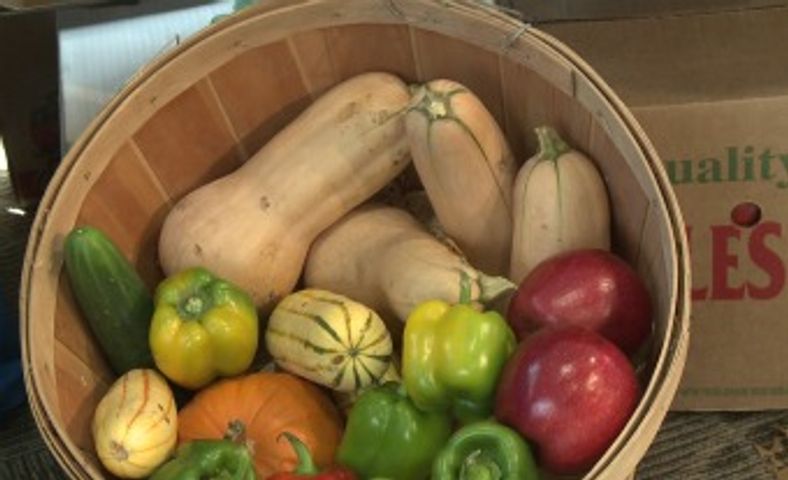 COLUMBIA - Many local farmers who sell their products at farmers markets have less and less to offer to their customers as the drought takes a toll on crops.

The Columbia Farmers Market is one of the largest in the state, open several days a week for the community to shop fresh farm grown food. More than 75 vendors participate in the Saturday market, making it possible to find a large selection that includes fruit, vegetables, fish and beef.

Troutdale Farm, managed by Dennis and Merritt VanLanduyt, has been part of the farmers market for 10 years. They breed and raise trout in their ponds in Gravois Mills, Missouri. However, the drought has caused their ponds to have lower water levels. Lower levels mean they cannot breed as many fish.

"We have not lost many fish this year yet, but if we have to go through August in similar conditions, it may take a huge toll. We have shut down areas of the ponds to try to keep fish healthy. Trout need very specific water conditions and we just cannot raise as many fish with lower water levels," VanLanduyt said.

While they have not raised their prices, lower production means less selection and less to sell.

"We are at the mercy of mother nature," VanLanduyt said.

Julie Morgan owns and maintains Hampton Hilltop Orchard in Randolph county. She said the drought has been especially hard on her vegetable and apple crops.

Morgan has already increased the prices on vegetables. If conditions do not improve, she said she may also consider increasing prices on the apples. Morgan said it is harder to grow apples in the drought because of the height they grow at.

"You cannot install overhead irrigation systems on trees like you can other crops. We have lost about 50% of what we grow," Morgan said.

The apples often split and fall off of the trees nearly three weeks before they are ready to be picked. This has resulted in dramatic harvest decreases and less selection for people at the markets.

Morgan also produces honey. She said the drought killed a lot of the plants bees need to eat and produce honey.

"It's very hard. I am very worried about the bees," Morgan said. She said she's afraid the bees won't make it through the winter.

However, not all of the vendors have seen a large decrease in growth because of the drought. The Salad Garden uses irrigation which prevents a lot of crop loss.

"The biggest way the drought has affected us is that it takes a toll on the people working in the heat all day," owner Dan Kuebler said.

They have also seen tomatoes grow better in this heat. Kuebler said that tomatoes love dry and hot climates because they are not exposed to as many diseases that grow in humid conditions.

"We do not see as many tomato plants becoming diseased in this climate. That can be a problem with Missouri," Kuebler said.

While effects of the drought on crops varies between farmers, many hope fall will provide some cooler weather and rain to help prepare the soil for next season.