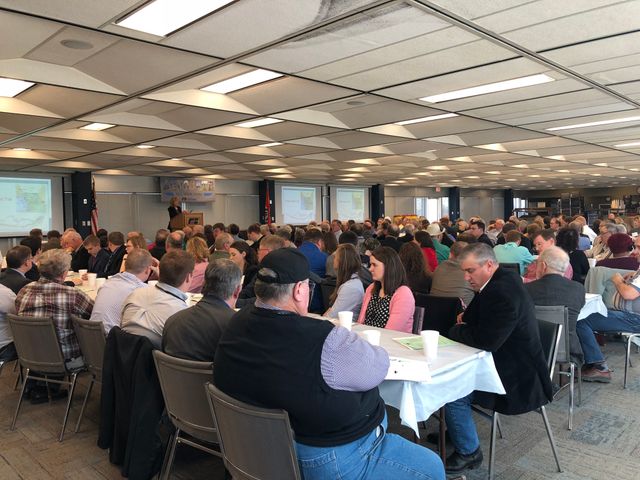 JEFFERSON CITY - The Missouri Farm Bureau hosted its Annual Legislative Day Tuesday to give farmers, students, journalists and business owners a way to talk to elected officials and learn more about what's been going on in agriculture politics.

The event consisted of MFB updates, guest speakers, a political outlook roundtable, a trip to the State Capitol, personal legislative visits, a reception, dinner and lunch.

Barry Bean, who is on the state board of directors for the Missouri Farm Bureau, said, “Anytime we can have a two way conversation with elected officials, it’s a good thing. They need to be reminded of what our issues are."

“In general, there’s a lot of distrust right now going on and so just hearing from our legislators that things are on the way back to a smoother road,” Bruce said.

The event will also focus on MFB's 2018 state priorities which are transportation funding, broadband access and property rights.

In addition to the MFB's three main priorities, Bruce said she hopes she can use this event to bring another issue to the forefront.

“There’s an EPA issue right now, nutrient criteria for our streams and water sheds. Missouri has the opportunity to set that ourselves," Bruce said. "It’s a very expensive ruling for us in mid-Missouri, and it’s going to save millions of dollars if Missouri can set our own rule.”

Farmers also discussed effects of the weather on their crops.

Some farmers said the recent rain helped their crops, especially with the recent drought.

“Fortunately, down in the southeast corner of the state, we haven’t had as severe a drought as the rest of the state.” Bean said. “We were a little dry, and the recent rains have actually brought us some much needed soil moisture. At this point we’re on target to have a good start to the crop year."

Other farmers said the rain did not help them because their land is either still dry or now flooding.

“We’re seeing some flooding in Southeast Missouri, South Central Missouri and that’s a real concern. A lot of the state was dry until the recent rains and Northwest Missouri, where I’m from, is still very dry,” Blake Hurst, president of Missouri Farm Bureau, said. "A lot of the winter wheat which is planted in the Fall and grows over the Winter is suffering from a lack of moisture or has been.”

"Our southern members are going to need some disaster assistance. The flooding is going to impact when we can plant, how we’re going to plant, populations and that sort of thing,” Bruce said.

According to Bruce, the rain will have a major impact on their year and their gains, and the planting season getting pushed back will change the kind of crops farmers can plant.

Bean said his worst weather problem has been with localized tornadoes, but he's more worried about Northwest members who had a drought and are currently facing other issues.