Fast Start Not Enough As Mizzou Women Fall to Texas 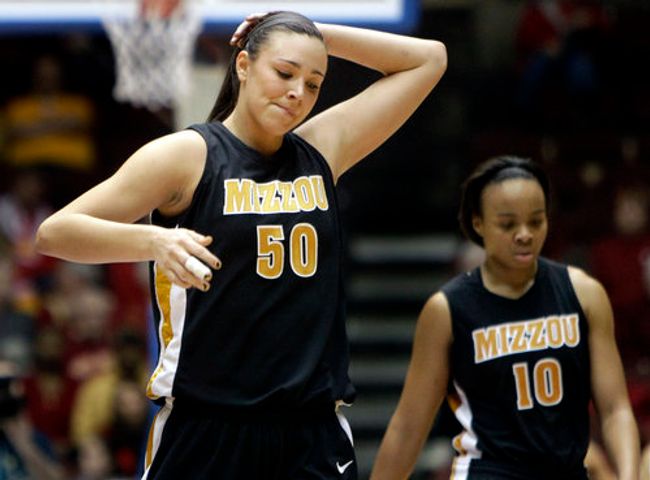 COLUMBIA -- BreAnna Brock made the most of Senior Night by registering a double-double before halftime, but her impressive night was unable to lead the Tigers (12-16, 2-15) to a win over the Texas Longhorns (17-12, 7-10). Despite jumping out to a 15-4 lead in the game's early minutes, the Tigers fell in their final home game of the season by a final score of 75-62. All three seniors registered points for Mizzou, as Brock added 24 points to her 16 rebounds, a season-high on the glass. Bailey Gee tallied seven, and Christine Flores added a point of her own as the seniors combined for 32 of the Tigers' 62 points.

Mizzou took an early lead after answering a Texas free throw when Brock made her first shot, the first field goal of the game for either team. Gee registered the next score of the game, nailing a three from the corner to give Mizzou a 5-1 advantage. After Texas answered with a two, Brock made her second shot of the game, a layup, to regain a four-point lead. A Texas free throw cut the lead to three points when Liene Priede sunk a three, giving the Tigers a 10-4 lead. Brock's third layup of the game then boosted the cushion to eight points.

Morgan Eye's first points of the game came next, as she hit a long-distance three pointer to give Mizzou a 15-4 lead, and forced Texas to burn a timeout. A layup on the Longhorns' next possession ended the 8-0 Tigers run, and a three on their following offensive set cut the Tiger lead to six. Kyley Simmons responded with a three of her own to stop a Texas run before it could start. The Longhorns then made a two-point jumper, and Mizzou took a seven-point lead into the under-12 media timeout.

After the break, the Longhorns scored a layup before Brock answered with a put-back of her own at the 10-minute mark. A step-back jumper then brought Texas back to within five, but again it was Brock that answered with two points, hitting two free throws before Texas rattled home a three. The Longhorns added a layup two possessions later to cut the Tiger lead to one point, but Simmons hit another three to extend the lead to four. Brock then took advantage of an "and-one" layup after gathering several offensive boards, and Mizzou again led by seven. Liz Smith then scored her first points of the game with a layup, but Texas quickly answered with a three. Simmons responded with two free throws, giving Mizzou a 31-23 lead. Texas went on a 6-2 run to end the half, with Brock registering the only Tiger bucket, and Mizzou took a 33-29 lead to the locker room.

The Longhorns opened scoring in the second half with a three on their first possession. Brock answered, grabbing an offensive rebound and putting it back for an easy two points. Two straight hook shots from the paint from Texas then gave the Longhorns their first lead of the game since 1-0. Brock scored another layup on the Tigers' next possession, and then made another on the Tigers' next possession, both answering Texas buckets. The Longhorns quickly answered with 12 straight points, establishing a 50-39 lead as a result.

Flores ended that run, which spanned 5:12, with her first point of the game coming from the free throw line. Brock then made her only three-point attempt of the game, bringing Mizzou back to within seven, but the Longhorns hit a three on the other end on the following possession. Eye then made a three to once again cut the deficit to seven, but Texas made another three on their next possession, and a layup on the following to increase the lead to 12.

After Texas added another point to the lead, Eye made another three, her third of the game, but the Longhorns responded with two free throws. Priede split a pair of free throws at the 6:51 mark to reduce the deficit to 11 points. Texas then added four straight points to build the lead to 15 points. Bree Fowler then converted on an easy layup after stealing a cross-court pass attempt, but Texas answered with a layup on their next offensive set. Texas then hit a last-second jumper to beat the shot clock, and the Longhorns took a 69-52 lead into the under-4 media timeout.

Despite being finished with the 2011-12 home slate, you can keep track of Mizzou women's basketball on MUTigers.com or the team twitter page (@MissouriWBB) for up to the minute news on the Tigers. Mizzou will face Oklahoma State on Saturday, Mar. 3 at 7 p.m.