Fatal crash closes I-70 in both directions in west Columbia 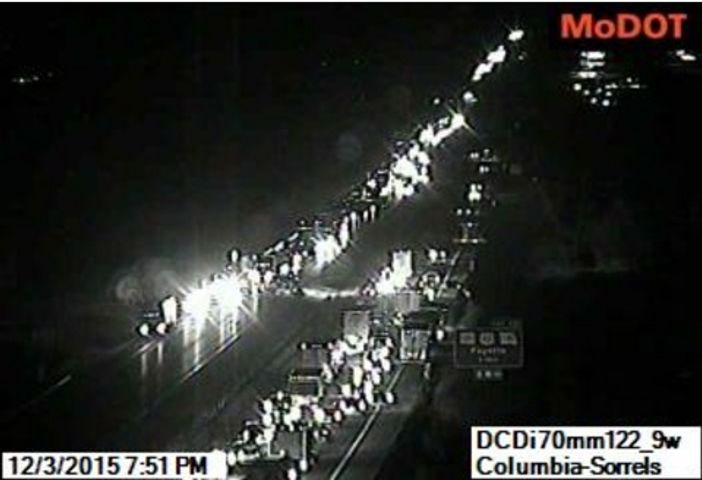 COLUMBIA (Updated 9:15 p.m.) - MoDOT said a vehicle collision closed I-70 in both directions Thursday evening in west Columbia. A firefighter on the scene confirmed one fatality as a result of the crash.

The Missouri State Highway Patrol said a tractor-trailer and one car were involved in the accident.

A Columbia police officer tweeted at about 7:50 p.m. that emergency responders were on their way to an accident.

Avoid I-70 if possible. Accident in EB lane has traffic stopped. First responders are using the WB lane to reach the accident victims.

MoDOT reported a short time later that the interstate was closed in both directions because of the accident, but Boone County Joint Communications said westbound I-70 was moving slowly. MoDOT said about 8:30 p.m. I-70 westbound was open but slow-moving.

A KOMU 8 Reporter on the scene said one vehicle was overturned on the interstate with a tarp over it.

A MoDOT traffic camera showed snarled traffic in both directions. The accident occured in an area with limited alternate routes. Drivers were being advised to avoid the area Thursday evening.

[Editor's note: This story has been updated with the latest information]