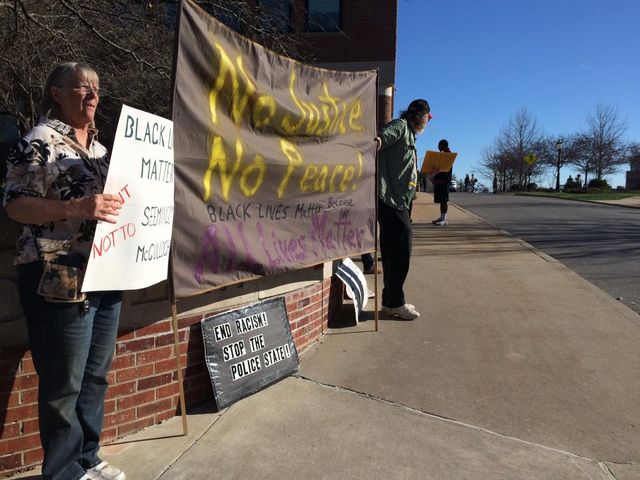 McCulloch was the prosecuting attorney during the grand jury proceeding that resulted in no indictment of officer Darren Wilson for the death of unarmed teenager Michael Brown.

About two dozen residents and students protested outside of Hulston Hall before McCulloch's appearance. They expressed their distaste of McCulloch as a prosecutor and his involvement in the Ferguson case.

"It's very important that we keep the pressure on," said Joan Wilcox, a Columbia resident and activist.

Another protester and MU graduate student, Reuben Faloughi, said he was displeased because MU didn't publicize the event or make it open for all to attend.

"This McCulloch talk is a perfect example of the lack of transparency on campus," Faloughi said. "A high profile case like this, attorney like this. And no word from the top? I don't get it."

Media was not allowed inside the event. MU said it was for pre-registered law students and staff only. McCulloch did speak to the media after his appearance about what he wanted the law students to take away.

"I think the one thing they can learn, we need to communicate with the public a lot more than we did," McCulloch said.

"I wanted to know what he was going to do to restore the faith in the black community because I don't think it's there," Jackson-Williams said.

She said McCulloch avoided answering her question in addition to others, but he was more willing to discuss than she expected.

"To a certain degree I had no expectations of him, so the fact that he was willing to answer questions at all was a good thing for me," Jackson-Williams said.

Concerning Ferguson, McCulloch shared what his approach was.

Ultimately, Jackson-Williams is anticipating more actions from McCulloch rather than further discussion.

"I'm just over Bob McCulloch. And I'm ready to move forward, and I want to see what Bob McCulloch is going to do for the community since he says he wants to get out there, and he wants to be more active," Jackson-Williams said.

MU said McCulloch's appearance at MU's law school was intended to teach students about grand juries and how they make their decisions in court cases.