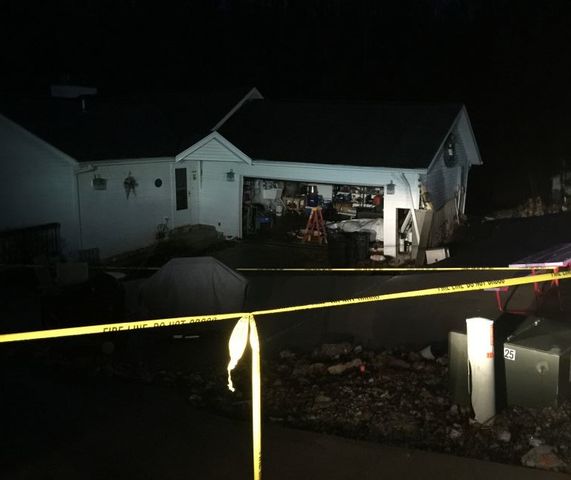 CAMDEN COUNTY - Mid-County Fire Protection District (MCFPD) Chief Scott Frandsen said Saturday afternoon he "seen more movement this morning that we have all week" from the house sliding into the Lake of the Ozarks.

Officials were back to monitoring the lake house full time following the heavy rains Saturday.

Frandsen said the Cub Cove Point home "continues to slip and slide" as heavy rains pushed it further toward the lake.

"I have absolutely no idea why it's still sitting here based on the movement we've seen," Frandsen said.

With no choice but to let the house fall into the lake, officials continued to play a waiting game Saturday. Frandsen said despite the additional movement, officials still had no way of knowing when the house would fall in.

"I can't help but think it's going to be sooner rather than later," Frandsen said. "This structure can't take much more."

Saturday marked day six of the house's descent toward the lake following a landslide.

Firefighters first responded to the home Monday, receiving reports a possible landslide at the property. When they got there, firefighters found the two-story home moving downhill toward the lake.

Further investigation revealed the earth surrounding the home was sliding and had even cut off utilities in the area. Firefighters secured the area around the home and contacted the Missouri Department of Natural Resources.

Fire officials, after exhausting all options, decided Wednesday to allow the house to slide into the lake.

Frandsen said the house was a second home owned by a St. Louis family, and they were not in the house at the time of the landslide.

KOMU 8 News reached out to MCFPD Fire Marshal Joe Brant for updates and comment, but has not responded back yet.

House continues slide toward lake, but moving at slower pace

Fire officials to let Lake house collapse on its own

Authorities developing plan to prevent house from going into lake