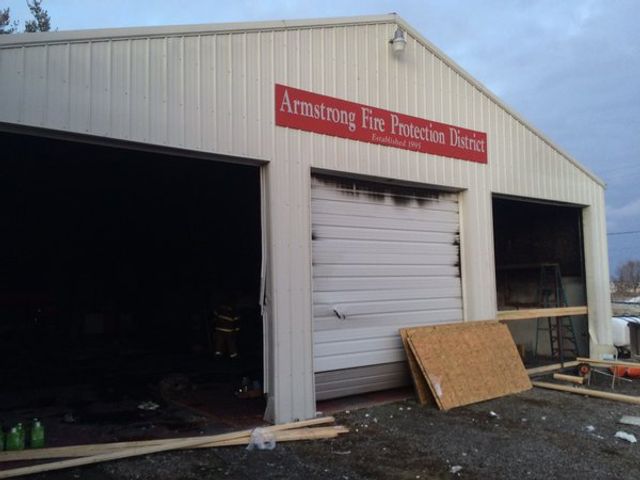 Fire Chief Anthony Shiflett said no one was in the building at the time of the fire, and no one was injured while fighting the blaze.

Shiflett said the volunteer firefighters received the call about one Saturday afternoon after someone in the community spotted the fire and called 911. Thirty to forty other firefighters from surrounding districts assisted the Armstrong firefighters.

Additional fire districts will be assisting the Armstrong district until their trucks are operational again.

Shiflett also said those experiencing a fire should not see much of a difference in arrival times, "It may take a minute or two longer for it to get here but not a substantial amount of time."

All but one of the trucks were destroyed in the fire. All of the other trucks were able to get out of the building.

The firetrucks did have severe smoke damge as well as broken windshields.

A fire marshal will assess the property before determining the cost of the damage.

Shiflett said he thinks the fire started in the tanker truck that was considered a total loss.

[Editor's Note: Shiflett said the cause of the fire that started in the tanker is not yet known. The district's trucks will remain out of service until they are inspected. Until then Howard and Randolph Counties will continue to provide aid.]