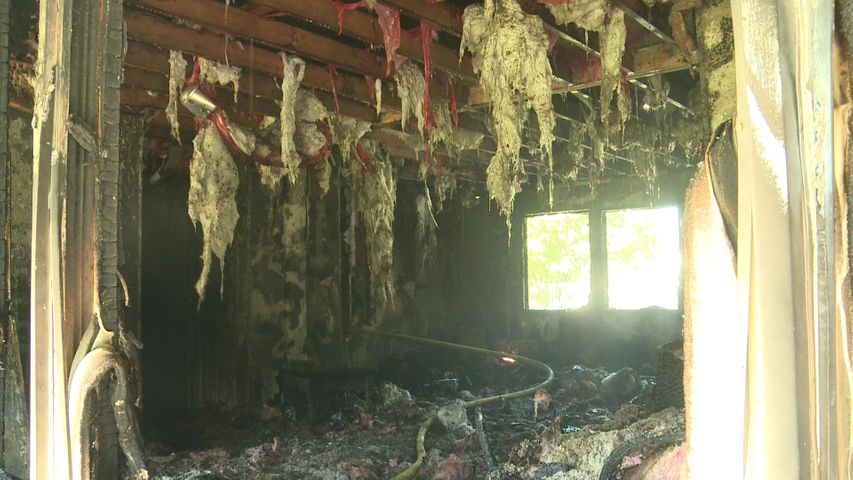 BOONE COUNTY - A fire destroyed a Boone County home late Wednesday afternoon. Boone County and Columbia Fire Districts responded to an emergency call around 3:45 p.m. on North Creasy Springs Road. Boone County Batalion Chief Gale Blompenkamp said about 20 firefighters were on scene for about an hour before firefighters put out the fire.

"Crews made an initial attack, an agressive attack and started pulling down ceiling and was able to knock the bulk of the fire down," he said.

When KOMU arrived, investigators had not yet determined the cause or the area where the fire began. Blompenkamp said he is not sure when investigators will release their findings. Firefighters said no one was injured in the blaze, but the house is completely destroyed.

"It's going to be a significant loss, probably a total loss on the structure and contents," Blompenkamp said. "We had heavy heat and smoke damage throughout the building."

Ameren UE officials also responded to a gas leak in the front lawn. Firefighters said it is not related to the fire.

The joint investigation by the Boone County Fire Protection District and the State Fire Marshal's Office determined the fire originated in the living room of the home. The cause was an extension cord which was running under furniture.

The estimated damage is $180,000. During the investigation, one fire investigator suffered from heat exposure but is doing well at this time.

Missouri River Regional Library brings back a traveling library for the community
JEFFERSON CITY - The Missouri River Regional Library's 'Bookmobile' is back on the road delivering books after not running for... More >>
18 minutes ago Tuesday, July 14 2020 Jul 14, 2020 Tuesday, July 14, 2020 5:51:00 AM CDT July 14, 2020 in Top Stories
Share:
Email
Facebook
Twitter