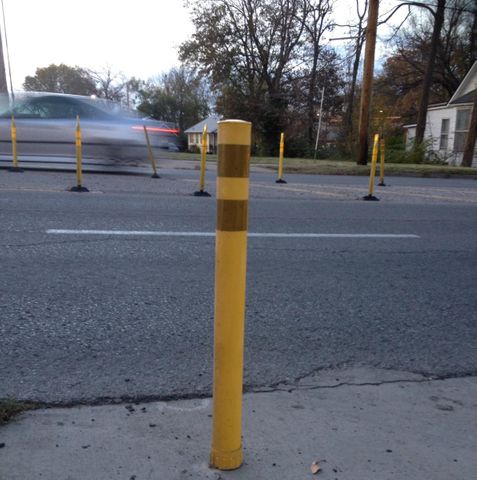 The construction involves removing yellow plastic delineators or lane markers on the median by North College Avenue and West Ash Street and replacing it with 6 inches raised concrete. There will be temporary lane restrictions on north and south lanes of College Avenue and work should be completed by Friday evening.

The bike boulevard concept is a striping plan that re-stripes the low-volume, low-speed, residential streets to give preference to bikes. This particular project starts downtown at 10th and Ash Streets and continues all the way to Stephens Lake Park. From there it goes to the south down Green Valley Road over to the Hominy Trail that was built just last year. This is the first bike boulevard to be installed in Missouri, according to Columbia Engineering Supervisor for Design, Cliff Jarvis. Other cities in the country that have bike boulevards include Portland, Seattle and Minneapolis.

When the city first started implementing the bike boulevard idea, some opposing views were voiced. One of the main questions drivers asked was whether they would be allowed to drive on those streets.

"Vehicles can still take that route. It's still open to cars," Jarvis said. "It's just...we're encouraging cars to use a different route. The preference is given to bikes."

"They're not saying don't drive on the street, they're just making it safer for bike and pedestrians on the streets by putting in some traffic calming devices," Simonson said.

"As a person living in this neighborhood, you're going to see reduce cut-through traffic. They're also going to see reduced motor vehicle speeds through there cause there's traffic calming infrastructure that's put into place," Simonson said.

Simonson has used the bike boulevard route and feels that having the concrete median will be safer and less stressful as a biker.

"A motor vehicle could go through quite easily," Simonson said. "In fact, they do in the winter. I've actually seen construction crews decide they want to make a left turn there even though you're not supposed to; they just plow right through them. It's going to be much, much safer for bicycles, pedestrians, wheelchair users using that bike boulevard."

*Above: A worker removes a plastic delineator by unscrewing the bolts from the base of the lane marker, clearing the space for concrete to be put on.

Rachel Gleason, a resident on Windsor Street, bikes from College to Windsor Street daily and said it's dangerous crossing the street, but she doesn't see how concrete median would be any safer than the yellow plastic delineators.

The project will cost a total of $279, 800 and is funded by the Federal Non-Motorized Transportation Grant.

Jarvis said contractors are planning to start on the intersection and sidewalk work Nov. 17. The wayfinding signage will be installed in early December.