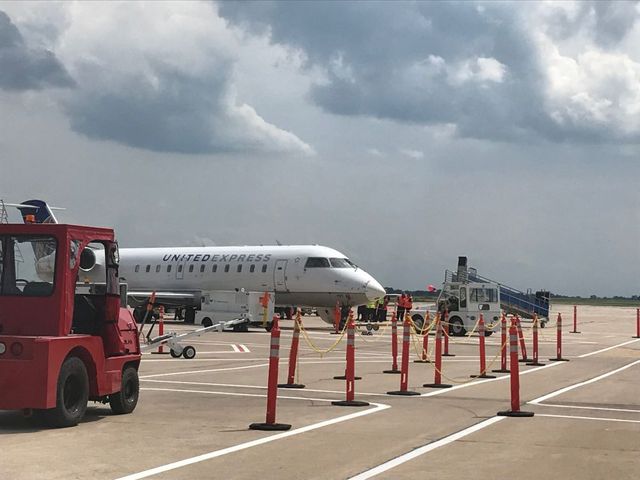 COLUMBIA - With United Airlines officially beginning its operations at the Columbia Regional Airport Tuesday, the airport is encouraging passengers to arrive earlier for their flights.

The manager of the Columbia Regional Airport, Mike Parks, said, “I think it’s a great idea to show up just a little bit early, give the employees time to adjust here to the additional passengers flying out of Columbia.”

According to United Airlines sales manager for Missouri, Andrew Bell, 37 passengers were on board the flight to Chicago Tuesday afternoon, marking the first ever United flight to depart from Columbia.

Peter Meyer lives on the west coast, and was on his second trip to Columbia to work with Veterans United Home Loans. He said this time around was easier.

“The first one I flew another airline,” he said. “I normally fly with United, so this is actually a lot more convenient for me.”

Meyer said, if United Airlines didn't operate in Columbia, he would have to keep switching airlines in the middle of his future trips.

“I have to fly from my regional airport, through San Francisco, to Chicago, switch airlines, then, fly from Chicago to here,” he said. “So this is a lot more convenient for me, just being able to stay on one carrier and not have to worry about ‘where’s my bag,’ moving things around and changing terminals.”

Although the airport will start having more passengers, as an out-of-towner, Meyer said, “being in a small airport” doesn’t make him worry about having delays.

“Usually, regional airports that are smaller like this are easier to get to,” he said. “You know, there’s not crowds. There’s not lines. Parking’s not an issue. You don't’ have to figure out where to go.”

Meyer said the price he paid for his ticket feels right.

“The price is what it is," he said. "You know, I could’ve flown to St. Louis and, you know, end up driving two hours. So you know, it’s a cost of doing business. So I think the convenience probably outweighs, you know, what the price is.”

Meyer said the change will mean positive things for the airport.

“Just having it be direct through Chicago or Denver, I think, opens up a lot of opportunities for people to get here more easily,” he said.

“We have the opportunity to take 50 people to Chicago twice a day, and 50 people to Denver once a day,” he said.

Parks said he got to the airport at 7 a.m. and saw “a lot of activity” around the terminal with United Airlines employees and passengers coming in.

He said things worked out well on the first day.

“We’ve built additional parking lots to prepare for the arrival of United, and we’re ready for the additional passengers,” he said. “Everything operated smoothly, and the plane took off on time.”

Parks said having United is good for flyers.

Park said, “United is gonna be great to add here in Columbia in addition to the already great services that American provides.”

Bell said it's something United has been looking forward to for a very long time.