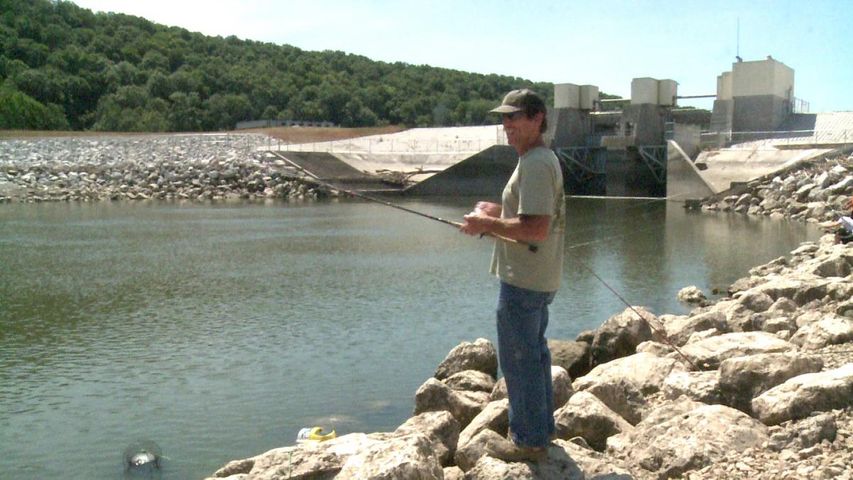 RALLS COUNTY - On a quiet, blue-skied Friday afternoon at the Bluffview Recreation Area, Tom Dunn stares over the Salt River for the first time in four years with a fishing pole in hand.

The peace lasts all but about five seconds.

It was indeed a gar. "Just a gar," Dunn says, a signal of his disappointment. Still, even though Dunn described his fishing performance as "just all right," he said he couldn't have been more pleased with his new fishing spot. Along with dozens of other fishers, Dunn camped out at sunrise Friday morning for the grand reopening of the Bluffview fishing area along the Salt River in northeast Missouri, marking the first day of public use since major flooding closed the popular spot in 2008.

The U.S. Army Corps of Engineers opened the recreation area Friday after four years of begging for nearly $6 million in stimulus money and major construction. Army Corps forester Allen Mehrer said the initial floods in 2008 "decimated" the area as the nearby Clarence Cannon Dam overflowed and created a rush of water with "tremendous force." With four to six feet of standing water in the recreation area, fishing became impossible.

Mehrer said it didn't take long for him to realize the importance of the area to local fishers.

"Within two weeks, we started receiving phone calls," Mehrer said. "And the calls were, for a lack of a better term, incessant. And we heard them."

Some fishermen came to Bluffview alone on Friday, but others made it a family affair. Scott Friedersdorf, who frequently fished at Bluffview before the floods closed it four years ago, brought his kids along for the first time. As his children eagerly described, they caught a crappie, a couple of bass and several other fish.

"It's been a long time, so I was pretty excited," Friedersdorf said. "And [the kids] have never been, so it was nice."

Mehrer said his crews have about 75 percent of construction done at the recreation area.