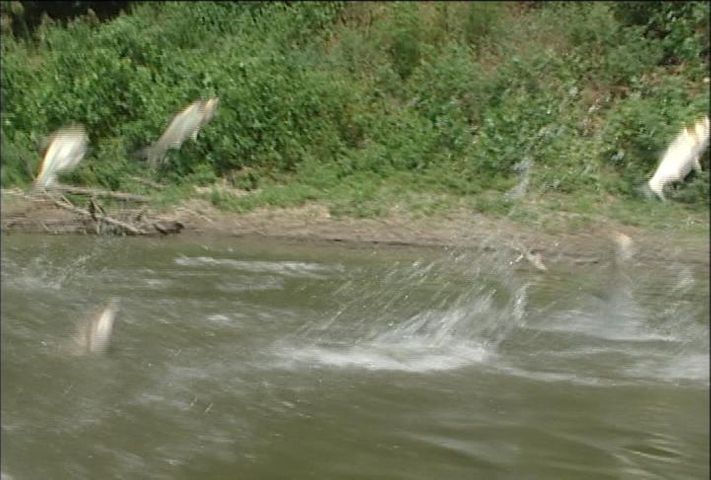 COLUMBIA - "If you can't beat 'em, eat 'em," is the motto of an MU professor trying to eliminate silver carp, an invasive species, from Midwest rivers. The fish is spreading rapidly, threatening local species.

The silver carp, also known as the Asian carp, was imported from China during the 1970s to help with water purification in U.S. streams.

MU Professor Mark Morgan said, "Everything was going fine until flooding occurred and the fish escaped captivity. They got in the Mississippi river and have been marching upstream since."

Morgan called it a "huge problem."

He said, "The invasion of the silver carp is an environmental problem because, what happens is, they take food sources away from native species and the problem is they are reproducing rapidly, more rapidly than rabbits."

Morgan said if nothing is done to stop their reproduction, the fish will take over the Great Lakes, and invade Canadian waters shortly after.

He decided the best solution was a simple one: he would eat them, and encourage others to do so as well.

It hasn't been easy.

Morgan said he has faced a lot of hesitation.

"Well it's carp and most people consider carp to be a bottom-feeder, and they have a problem with this," he said. "It's a miscommunication, or lack of information I should say, as far as the American public is concerned."

Morgan said the carp he serves is very popular to eat in Asian countries, and is different from the well-known bottom-feeder. Silver carp is a midstream fish and safe for consumption. When people try it, Morgan said, they usually have good things to say about it.

After he served chili to customers at Moser's, the feedback he received was surprise, he said.

"Everybody says this must be some new turkey recipe and I say, 'no, no, it's fish,' and they just can't believe it."

He said that type of reaction is typical.

"All of the results have been positive, very few people have said, 'oh this is bad' or, 'this tastes fishy.' The response has been overwhelmingly supportive of this particular product."

Morgan has experienced the difficulty that comes with convincing people to try the carp but said he's up for the challenge.

"It's an ugly fish," he said," there's no doubt about that, its bony, but I can resolve all of those problems. Once you put it in the tube, cook it in pan, you don't remember what it looked like."

Currently, the fish is sold for $2 per pound at Moser's on Business Loop 70.