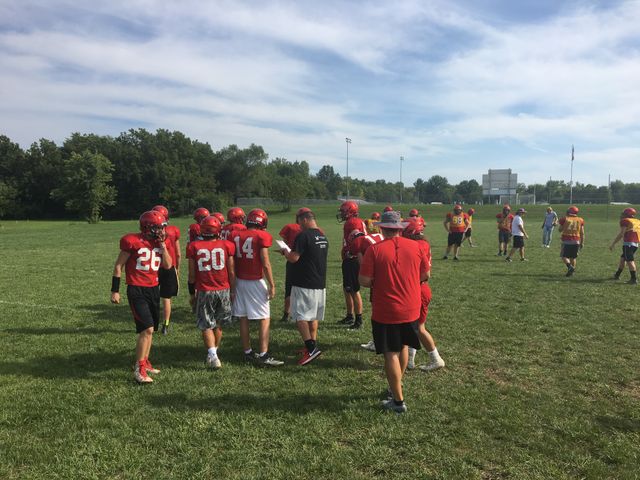 ASHLAND - Ask any player on Southern Boone what motivates him and they'll all likely say the same thing: last year's 21-point loss to Blair Oaks in the Class 3, District 6 title game.

"That's our motive throughout the whole year," said senior running back Cooper Mange. "We face every game like we're going in to play Blair Oaks."

This season also represents a milestone for head coach Trent Tracy - it's his first group of seniors he's coached for all four years at SoBoCo.

"It's great to see their growth, their maturity, their size difference, and to see their roles as they go from a freshman who's kind of following the older kids to a senior who's now the leader and setting the example," Tracy said.

Tracy, a St. Louis native, was an assistant at Moberly for seven years before taking the head coaching position at Southern Boone in 2014.

But already in week two, the Eagles' season has taken an unexpected turn.

Senior quarterback Seth Mueller broke his thumb after banging it on the kneepad of his backup, and now replacement, Sam Stitchnote during practice this week.

"It hurts, man," Mueller said. "I broke down earlier because I knew I wasn't going to be able to do it. You just gotta' look at the bright side of things and be humble."

Now it's up to the junior backup Stitchnote to step in and lead the team for at least the next four weeks.

"It just means a different job," Stitchnote said. "I'm expected to play well anywhere I play. I'm expected to make blocks at receiver or make tackles at safety so it's all about just doing your job, and if everyone does their job, we'll be fine."

After injuries left him short-handed in previous seasons, Tracy came into this season prepared.

"One of the things you learn as a head coach is how to deal with adversity," Tracy said.

"Stitchnote took 50-50 reps with Seth Mueller this summer, so we feel confident in what Sam is going to be able to do."

With a new role as a supporter from the sidelines, Mueller has no concerns for the team's future.

And of all coach Tracy's advice over the past four years, one message stuck out to Mueller in particular.

"Go hard, don't waste it," Mueller said, with a wave of his cast, "because you never know when you're going to fall."