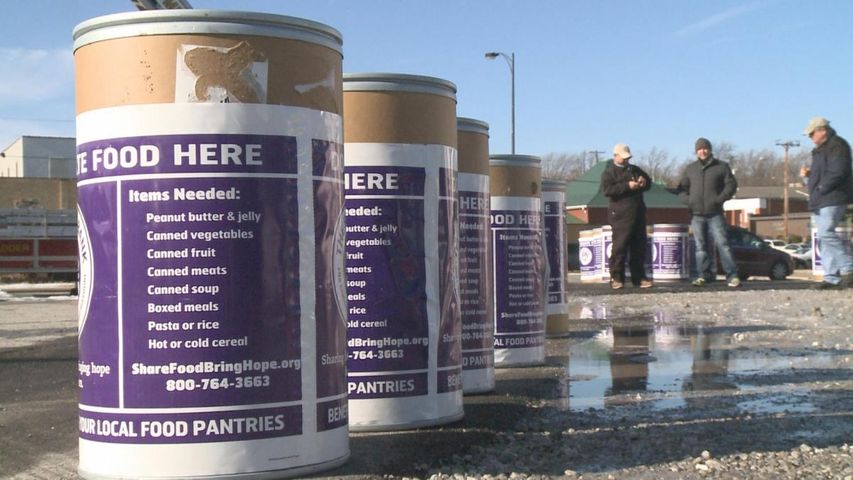 COLUMBIA - The Food Bank for Central and Northeast Missouri partnered with the Columbia Fire Department to host the fifth annual One For One Holiday Food Drive at the corner of Providence and Broadway.

Peggy Kirkpatrick, the executive director of the food bank, told KOMU 8 News the central pantry serves 14,000 people in one month just from Boone County. That is a 15 percent increase from last year.

Kirkpatrick said, " The need for food is very high in our community especially during the winter months. People with limited incomes spend their money on utilities and have no extra money for food."

Food bank staff, firefighters and volunteers woke up at six Wednesday morning to brave the cold and collect donations for the food bank.

The Columbia Fire Department helped collect the bins of donations from local businesses and buldings and bring them back to the food drive to be weighed and loaded into the trucks.

Spry said, "Times are tough out there and hunger is an emergency. And when you call 911 you call upon us to help you in your time of need and so it seemed appropriate that the Columbia firefighters help the food bank."

Columbia Mayor Bob McDavid gave the city a challenge to donate one million pounds of food. Bobby Kincade, associate director for the food bank, said that as of 4:30 p.m. Wednesday, they had already raised more than 800,000 pounds of food.

Kincade said, " You know people around here are always more than willing to help."