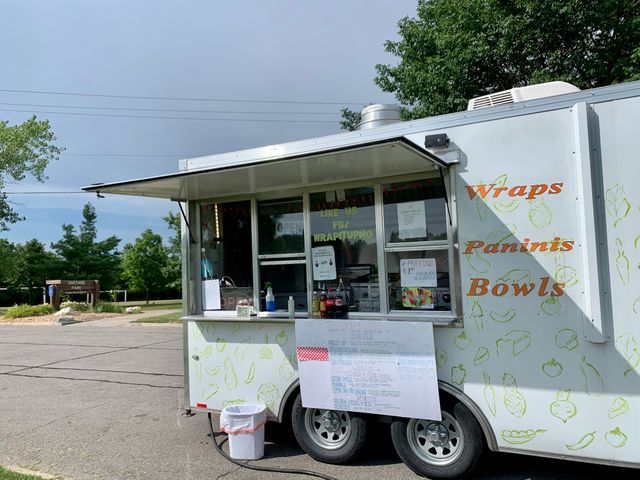 Food Truck Friday began May 2 and began featuring different food trucks every week starting on May 22.

A neighborhood Facebook group got together at the beginning of the statewide COVID-19 shutdown to plan a weekly event to help food trucks throughout the pandemic.

The events were set up to help small businesses as well as a way for the neighborhood to see each other at a safe distance.

"It gives people a chance to visit with each other," said Jennifer Roberts, a member of the Facebook group. "Even though they're six feet apart, it's still very meaningful."

Wrap it Up is a new food truck in Columbia that opened just before the pandemic hit. When the statewide shutdown began, it had to temporarily close just weeks after opening.

"We first opened up in March, beginning of March," owner Aletha Norvell said. "We had a couple events and then we were shut down. We were shutdown for six weeks."

Aletha and Larry Norvell are the owners of the truck and ran the truck themselves at Friday's event.

"This is our first time here," Aletha Norvell said. "They called us and invited us out tonight."

Norvell says they've been doing lunches and small events like Food Truck Friday to adapt to the lack of bigger food truck events that were cancelled.

"At the beginning of the year, we had festivals to go to, but, you know, everything's been cancelled due to COVID-19," Aletha Norvell said. "We had to make some adjustments."

People in the Shepard Boulevard neighborhood typically walk, drive or bike to Shepard Park to take food home while supporting local food trucks during the pandemic.

"Particularly, in this time, you need to support your local businesses," Roger Caffey, a neighborhood resident at the event, said. "It's very important to keep everybody economically going."

Aletha Norvell says the community support has been crucial for her new food truck to stay in business.

"It's a small business, you know, and it's how we make our livelihood," she said. "We just need them. We need the customers to survive."

Roberts says there are plans in place for more Food Truck Friday events in the Shepard Boulevard Community. The event typically begins from 4 p.m. to 8 p.m.