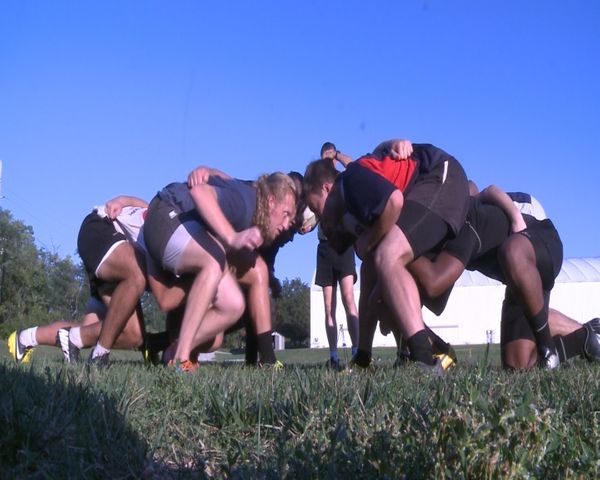 COLUMBIA - One of the biggest issues in football today is concussions.

In late August, the NFL paid more than $765 million to roughly 18,000 former football players as compensation for concussion-related head injuries. The NCAA reported in 2012 that concussions have been on the rise since the 1980's.

As the game of football has evolved over a century, so too has the equipment. Where players once wore leather caps and soft pads, they now wear helmets with a hard casing and plastic pads that add size to the athlete. So even just wearing the helmets and other protective gear could be part of the concussion problem.

"In football, when you wear all that padding, you feel kind of invincible," said Brandon Pascal, a member of the rugby team at the University of Missouri and a former high school football player.

"In rugby, you can only hit as hard as you can stand to be hit," said University of Missouri rugby coach Don Corwin. "In rugby, you don't have the padding, so you feel the hit just as much."

The problem with helmets is their design. Dr. Aaron Gray, a sports physician at the University of Missouri and football team physician, said football helmets have evolved from their leather cap days to the hard helmets we see now for a reason, but there is a new problem the equipment helps create.

"Football helmets were made to prevent skull fractures, but they're not made for concussions," said Gray.

"I just feel like football helmets are inherently flawed. I don't know why they make it out of such hard material on the outside," said Pascal. "I get the protective measure of it, but when you hit the ground or you hit another helmet, it's two solid objects; there's nothing there to absorb the impact. There's soft padding on the insides, but it still resonates. So it's like a giant bell on your head, pretty much."

A concussion occurs when a large amount of force, such as a person, the ground, or even a ball hits the head. This rattles the brain around and can cause a change in chemical composition and blood flow, according to Dr. Gray. However, a concussion would not change the structure of the brain, so trying to detect one on a CAT scan or MRI would be impossible. But that's not the only reason it's difficult to diagnose concussions.

"Concussions are very individualized," said Dr. Gray. "One of the toughest things I have to do, as a physician on the sideline, covering sports, is to decide when a player has a concussion as opposed to when they don't. Some athletes have more of a headache or dizziness, others feel they're more in a fog or dazed."

But while concussions are arguably the biggest issue in football today, not all players seem to be taking the issue seriously. An ESPN poll conducted on 92  anonymous college football players showed that 33 percent of the surveyed players claimed they lied to their physicians about having a concussion. One player from the SEC said he has avoided the team physician in order to keep playing despite having a potential concussion.

High school football is another place where concussions occur on a somewhat frequent basis. A Purdue University study estimates there are between 43,000 and 67,000 concussions in high school football each year. And that's just the documented cases. Including cases that go unnoticed or untreated, the number of concussions could rise to about 100,000.

Pascal thinks a lack of knowledge and the tough-guy mantra of football leads to high schoolers ignoring concussions.

"In football, in high school, I mean, concussions are pretty common. But I think the scary thing is in high school football, these aren't trained professionals and coaches have egos and kids want to show out. A lot of them (concussions) do go undiagnosed, and there are kids who, knowing what we know now, probably do have concussions that play through it or didn't get it treated all the way."

The equipment in football has made tremendous strides in protecting its players. So it's only a matter of time until a new helmet comes out that is concussion safe...right?

"We just don't currently have materials such as soft foams and padding that can stop that (concussions) but then also hard enough on the outside to prevent a skull fracture," said Dr. Gray. "And a lot of people don't feel we'll ever be able to make a perfect helmet."

So without a technological solution to the problem, Dr. Gray believes teaching better technique at the youth league levels and the rule changes implemented at the collegiate and professional levels are the best ways to prevent concussions.