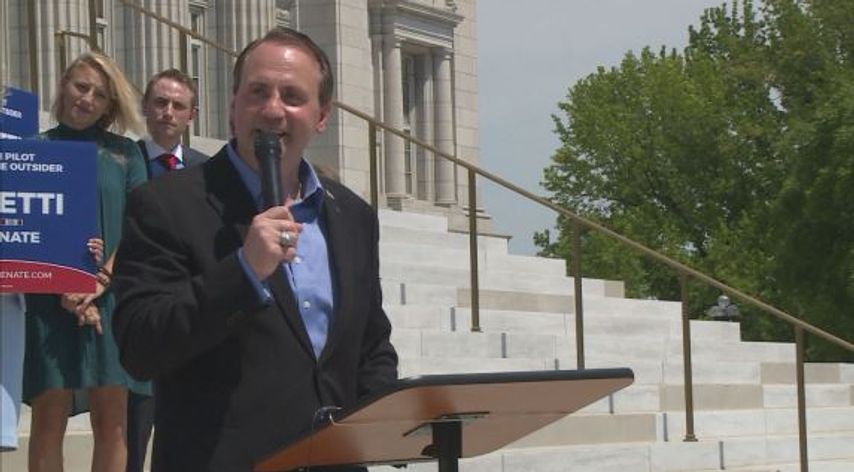 JEFFERSON CITY - A former U.S. Air Force B-2 bomber pilot announced a new mission Monday. Republican Tony Monetti of Warrensburg plans to run for the U.S. Senate seat currently held by Sen. Claire McCaskill, D-Missouri, which is up for grabs in November 2018.

Monetti, his family and supporters publicly launched the campaign during several kick-off events throughout the state Monday, stopping in St. Louis, Jefferson City and Independence.

A small group of onlookers watched as Monetti made his announcement at the state capitol in Jefferson City Monday afternoon.

In his speech, Monetti cited his military experience as one of his strengths, calling himself a "conservative outsider" like Gov. Eric Greitens.

"Missourians are looking for leadership more than anything else," Monetti said. "We're desperate for people that have been in situations like myself, not only having served in the military, but having run a business for seven years."

Steve Quick, a campaign supporter who spoke at the Jefferson City event, said Monetti's core values set him apart from other pilots and now, other political candidates.

"Excellence, service before self, personal integrity, relationships and joy," Quick said. "Those are the kinds of values Tony will bring to Washington."

Monetti, who has been a university instructor and small business owner, said he understands the struggles Missouri's citizens face—struggles like securing reliable health care or starting businesses—better than "career politicians."

"I think the people of Missouri are just fed up with politics as usual," Monetti said. "We're so sick and tired of people either on the far left or the far right, and what we need is somebody in the middle who can bring us together. I believe that we can do that, but it takes leadership."

In his campaign announcement, Monetti outlined his campaign values, highlighting his committment to conservative ideals like smaller government, lower taxes, a strong national defense and the Second Amendment.

Monetti also said he hopes to spearhead new initiatives to increase access to mental health resources in Missouri and across the country.

After the 2016 elections, Democrats are looking to the November 2018 elections as an opportunity to gain or maintain Senate representation.