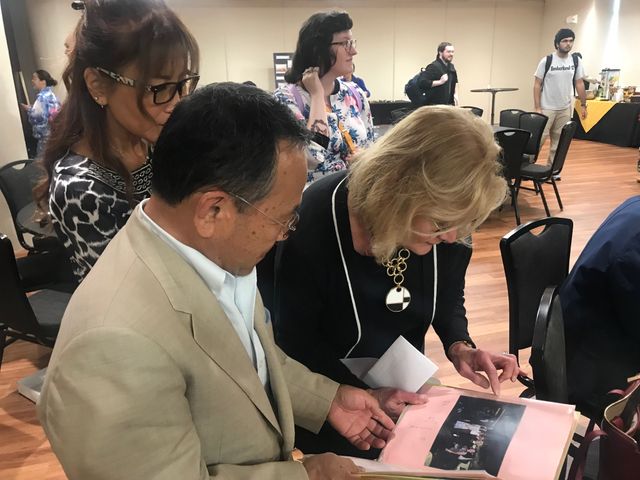 The sister city program began back in 1988. Its purpose is to provide “cultural understanding, an atmosphere for economic development and a long-lasting friendship.” The current visit revitalized that purpose, as it’s the first time Hakusan City representatives have come to Columbia since 2013.

Former Columbia mayor Mary Anne McCollum was in attendance at the reception. She was part of the first delegation to visit Hakusan City in 1990 - back when it was still called Matto City.

“It was just a very small delegation and we did a short trip to Matto City and were warmly welcomed by both the mayor and all of the people,” McCollum said.

She ended up going back two other times, and maintained her relationship with Hakusan City’s former Mayor Kumeo Hosokawa. Although Hosokawa could not attend the visit to Columbia, he sent a handmade gift for McCollum, which she received at the reception on Tuesday.

McCollum said she’s watched a friendship between the cities develops.

“Right now, it’s very heartwarming that MU is starting to really grow a partnership with Hakusan that our students at the college level can experience,” McCollum said.

Sang Kim, the director of MU’s Asian Affairs Center, is helping spearhead that partnership. He said it extends beyond the university.

“We are trying to build multilateral relationships between cities, school systems on both sides and at the university level,” Kim said.

Kim said the sister city relationship not only helps both cities get ideas for economic and educational growth, but also gives citizens a more worldly view.

“From where I’m sitting as an individual just two feet on the ground, the world is getting larger,” Kim said. “So through these exchanges, I’d like to help every citizen to know more about Japan and the world.”

The delegation will take a day trip to explore St. Louis on Wednesday.