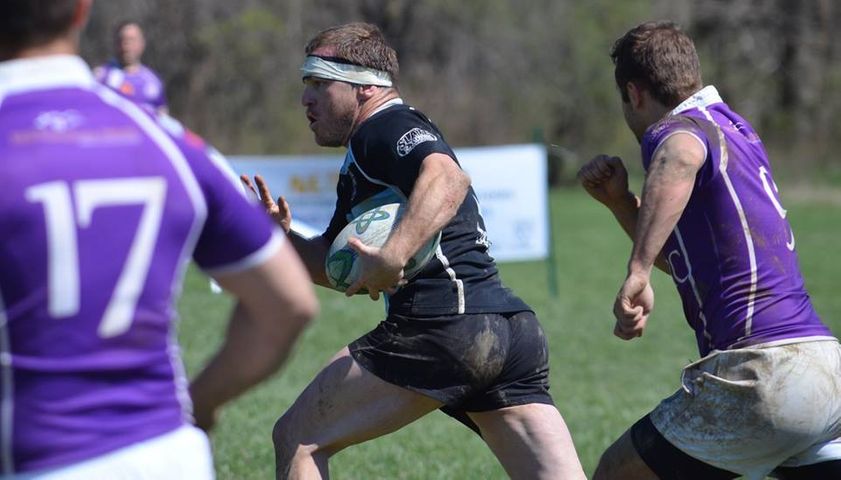 COLUMBIA – One athlete came to Columbia 17 years ago to play football, but has been here ever since playing a different sport.

Shan Schauffler moved to Columbia from Huntsville, Missouri, to walk on as a running back at the University of Missouri.

“I played football from ’99 to ’02,” Schauffler said. “And then the last game I played there I was like, ‘I’m just gonna put up my boots and be done with it everything like that.’”

But he wasn’t finished with sports just yet.

“A buddy of mine Bobby, I worked with him,” Schauffler said. “And for the next six months after I graduated he tried to convince me to come out. Every single day we worked together he was like come out, come out, come out. Finally I was just like fine I’ll try it one day and go out and see what happens with it, and after that first practice I was just hooked. “

But Schauffler wasn’t hooked on playing football again. He was trying out the game of rugby.

He said he noticed many differences between the two physical sports.

Schauffler said football will always be his first love, but rugby gave him a new experience

“There’s always gonna be a type of friendship, brotherhood bond that you have with your teammates, the other players,” he said. “But I don’t know what it is, I don’t know how to explain it, it’s just one of those things. It’s a bond, it’s a connection, it’s a brotherhood that I’ve never felt in any other type of sport I’ve been a part of, or any type of organization that I’ve ever been a part of.”

He said it’s partially due to how the sport is played.

“You’re out there and it’s when you have the ball there’s nobody blocking for you, and so you’re all alone until you get tackled, and then after that there’s those guys coming over, it’s called rucking, rucking over ya to protect you,” Schauffler said.

Schauffler is now the captain of the Columbia Outlaws Rugby Club. The team was resurrected five years ago, but it has been a building process for them.

“The past two years, three years we’ve had the opportunity to be in a competitive league where we could work towards that national championship, however just because of our experience levels, our numbers and our injuries, we just couldn’t be that competitive squad that, we wanted to be,” Schauffler said.

He said this is the first year the team has come ready to play with a new mindset.

“We wanted to come and we wanted to basically prove ourselves as that established squad, and established team, and not just, what’s called a social team,” Schauffler said. “Where they just go out there and you know they enjoy playing the sport but they’re actually not competing for a national championship. “

The Outlaws went 6-2 in the fall season, which qualified them for the playoffs this year. This is the first time the team will be competing in the regional playoffs.

“I think we’re gonna come into it with the same mindset we had at the beginning of the fall season, is this is going to be our year to show that we’re an established club,” Schauffler said. “We’re a club that wants to compete, to win and we want to compete and have that ultimate prize. We want that trophy we want to host it above our heads at the end of the day.”

The Columbia Outlaws won their first playoff game Saturday, 45-5, against the Arkansas Gryphons in Wichita, Kansas. If they win the regional title they will qualify for the Frontier Regionals in Arizona in mid-May.