Former offenders are getting a second chance at Job Point 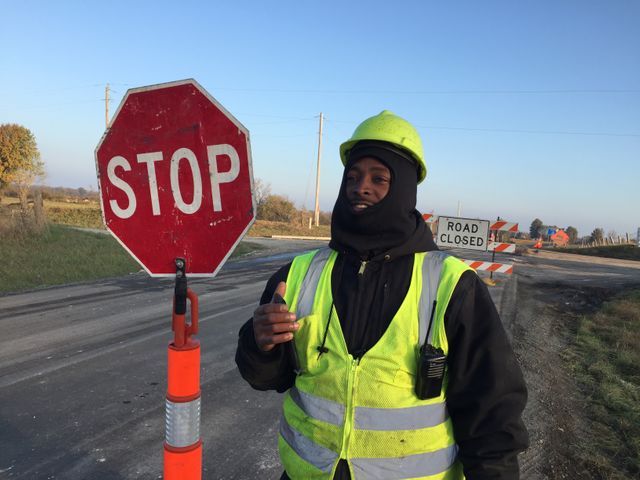 COLUMBIA - Terron Wings says he considers himself blessed he can now call himself an “American taxpayer.”

Wings, 37, currently has a steady job in construction, a wife, three children, a dog and a home in Holts Summit. On Saturdays, he roots for the Missouri Tigers football team, and on Sundays, he cheers for the New England Patriots.

Before, Wings was not living his “American Dream,” but, instead, his nightmare.

“I’ve been incarcerated basically 10 years out of the last 12 and a half years,” Wings said.

Wing said he had to watch his children grow up without him at home, and he missed a lot of memories.

“I’ve been gone, I missed a whole lot of family portraits,” Wings said.

Wings is what is referred to as a recidivist, or repeat offender. According to the Missouri Department of Corrections, the chances of a prisoner being re-arrested like Wings,is almost 44 percent  in the state.

“The biggest thing with the criminal mindset is the fear for change and the fear of having tough times,” Wings said. “It’s easier for us to go back to what we’ve known for years or what we’ve been doing because it’s easier.”

Wings said, while in prison, he used the time to reflect on his life. He said he learned love, and being able to be there for family, are more important than money.

"As a previous drug seller, that’s all you think about, it’s all you want to do, but it’s a teachable moment," he said. "I guess it took 37 years for me to figure that out.”

It was also in prison, Wings said, he learned just how much damage his offenses were doing to the country. He said drugs are a key contributor in many crimes.

“Indirectly, I impacted the world by selling drugs,” Wings said.

Free once more, and with a new state of mind, Wings said he was determined to break the cycle he had fallen into. The only problem was he didn’t know how he was going to do it. Then he met someone in the Reality House.

“It was a guy in the halfway house, the Reality House, that was going to Job Point,” Wings said. “I guess he was the one bringing the brochures in, and I seen him and I asked him about the program.”

Job Point is a vocation training service in Columbia that offers programs  in construction, heating and air conditioning, and carpentry.

Job Point CEO Steven A. Smith said one of the best parts of the program is that recidivists like Wings who complete it have a much lower risk of returning to prison - roughly one-third of the state average.

“If they want to make that change than we’re all about trying to help them,” Smith said.

After hearing about the program, Wings applied and was accepted in 2017.

Rance Austin, Job Point’s job works advisor, said the program is able to help people like Wings by first getting them to believe in themselves.

Austin teaches a week-long resume class dedicated to this idea. He says it is a crucial step in helping people, not only understand that they can make a change in their life, but also avoid ever returning to old habits.

Wings said, Austin’s resume class taught him a lot about himself.

“The whole time Mr. Rance is just getting you to see what you haven’t been seeing in yourself,” he said.

Wings said the program, and Rance, made him think about himself in an entirely new way.

After the resume class, Job Point has participants enroll in a specific program to learn the skills and obtain the necessary certification associated with that trade. In Wings’s case,it was the Highway Heavy Construction course.

The program teaches students basic construction skills, equipment operation, paving, craftsmanship and other abilities associated with highway maintenance. According to Job Point’s fiscal data, in 2016, the course had a 75 percent job retention rate over 90 days or longer.

Justin Gipson, the instructor for the Highway Heavy Construction course, says the reason the program has so much success with keeping people employed and out of jail, is because he reminds them constantly of the opportunities they can get once they're done with the program.

"You don't have to have to work nights in a factory," Gipson said. "There are legitimate means out there that will accept them no matter what their background is, and pay them well. Construction is the most forgiving field in the country"

Wings said it was important to hear what jobs he could get if he worked hard and graduated.

"So I did that and people saw that and put that extra arm out for me,” he said.

Both Gipson and Austin agree the philosophy of getting people to believe in themselves and giving participants consistent reminders of their ability to get higher quality jobs, is what has caused the group’s low recidivism rate.

After ten weeks, Wings said, he realized he was no longer a criminal but instead a new man.

“All my hardship, all that in the past made me who I am today,” Wing said. “I take that, I’m more confident about that, I’m not scared to talk about it. I’m not shameful or nothing like that.”

Smith said the success of people from the program is almost indescribable.

“It changes lives,” he said. “For most people that go through our program, graduation is the first sustained success they’ve had in their life.”

After Wings graduated, the opportunities Job Point talked about manifested in a job at Chester Bross Construction.

“I have a job and I have a good job and when people hear where I work and what I do it erases everything,” Wings said.

He is also not the only one to find success. His co-worker Jason Holloway, is also a former offender and Job Point graduate.

“Job Point gave me my life back, you know,” Holloway said. “Put right back in my life like nothing ever happened. My bills are getting paid, my life is coming back together."

Wings and Holloway are what Smith calls a “quick, but great, return on investment.” He said last year, graduates like Wings and Holloway made more income than Job Point’s entire budget. Smith said he hopes this year’s class will do the same.

Since graduating, Wings is now able to support his family, and consider himself a part of the solution instead of the problem.

“I’m able to take care of my family, in the best way and the legal way. Probably without getting this type of job, or even finding Job Point, I don’t know actually where I’d be,” Wings said. “That’s the biggest thing is now, when you talk about the country, I’m a part of it, instead of apart from it.”

Wings said he is also now able to be the father to his children that he wants to be.