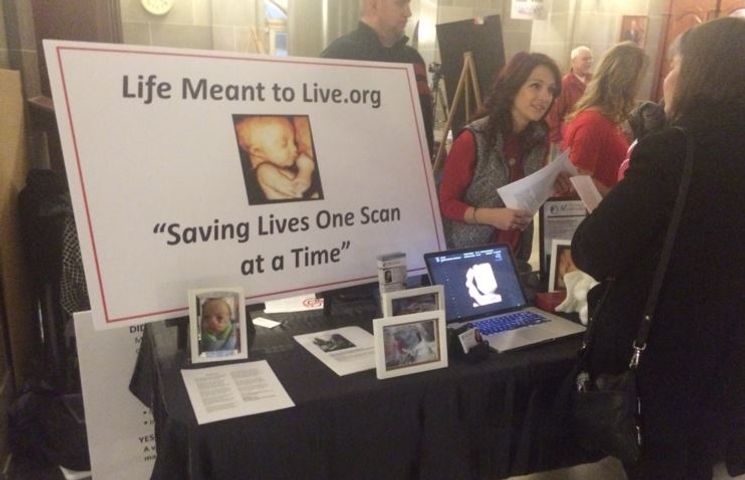 JEFFERSON CITY - The Missouri Right to Life organization held its Pro-Life Action Day on the first floor rotunda of the Capitol on Tuesday afternoon.

The event's keynote speaker, Sue Thayer, is the former center manager of Planned Parenthood at the Heartland in Storm Lake, Iowa. She said, after working for the organization for 18 years, she believes Planned Parenthood is more concerned with the "bottom line" than on women's health.

"I started there thinking I was really going to help women," she said.

Thayer said the location did not offer abortions when she started working there. She said the events that made her not want to work there anymore included webcam abortions with non-medical personnel, an alleged deceased infant being found in a recycling bin and fund raising to keep law enforcement from receiving womens' pregnancy records.

Thayer said her faith was a key part of her decision to reach out to pro-life organizations and eventually and start the 40 Days for Life movement in Storm Lake. She said the action caused her to be fired, and called it a blessing.

"We have gone from 10 abortion clinics to one," Kinder said. "We're going to continue this by getting some good legislation passed this year."

While Mead said she did not know about the events in Iowa, she said the Planned Parenthood locations in Missouri are in complete compliance with all laws.

"One in five people will visit a Planned Parenthood in their lifetime," Mead said. "In Missouri, we serve 60,000 peopl per year and offer the highest quality reproductive health."

Another piece of legislation being supported by the group is called the Simon Law, or House Bill 1915, which aims to give patients and parents of minor patients more control when it comes to end-of-life decisions in hospitals.

The mother of the child the bill is named for said that more legislation aimed at preserving life could have saved her son Simon who was hospitalized for having an extra chromosome. Sheryl Crosier said there was a do-not-resuscitate order placed on her son's file without her knowledge, and her son was given minimal treatment.

"Someone determined that my child did not have value," Crosier said. "They violated his human rights. He was also a victim of genetic discrimination, and they took away mine and my husband's parental rights."

There will be another Pro-Life Action day on April 5.