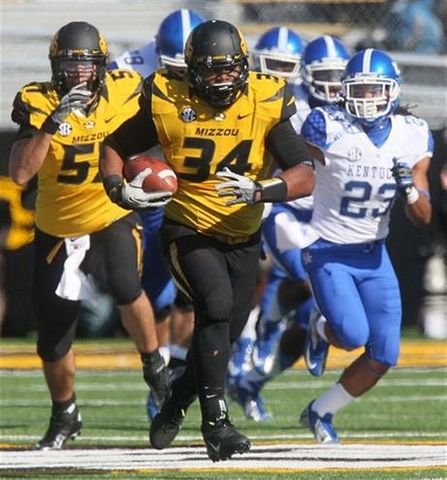 After dominating at Mizzou, Sheldon Richardson is the latest Tiger heading pro.

Over the past few months, he's been going through the draft process with the workouts and the interviews.

Here's some advice from former Tigers who went through it before.

"Man, the best thing right now is don't believe the hype," said former Mizzou Defensive Lineman Ziggy Hood, who was the 32nd overall draft pick in 2009. "You got everyone telling you how good you are, what you're going to do, what can be accomplished and all that. Don't believe it"

"One thing I can tell him is just to work hard," said former Mizzou Linebacker Sean Weatherspoon, who was the 19th overall pick in 2010. "Remain and stay humble. And once you get into the league, take off."

Most mock drafts project Sheldon to the Carolina Panthers at pick 14. But players say you can't listen to the speculation.

"You've got to tune it out. Unfortunately, I mean, some of it may be right but the majority of it is probably wrong because people just don't know," said Kevin Rutland, former Mizzou Defensive Back, who was undrafted in 2011.

"You've got to understand that nobody knows except for the team that's going to draft you and even they don't know sometimes until draft day," said Maclin.

Draft day is April 25. Getting drafted is a dream come true--but until then, they say it's tough to handle the pressure.

"I don't even know if you can handle it. It's a pretty anxious time. It's confusing at times," said Rutland

"Then waiting and not knowing, the uncertainty. That's what makes it so exciting," said Brad Smith, former Mizzou Quarterback, who was a fourth round pick in 2004.

And they would all love to add a fellow Tiger to their team.

"Oh man, I'm pulling for them to draft everybody. Madison, Xavier, you know whoever is coming out. I hope the Steelers get them all," said Hood.

"You know what? That'd be a good move for us man. But I don't think that guy would be around at pick 30," said Weatherspoon.