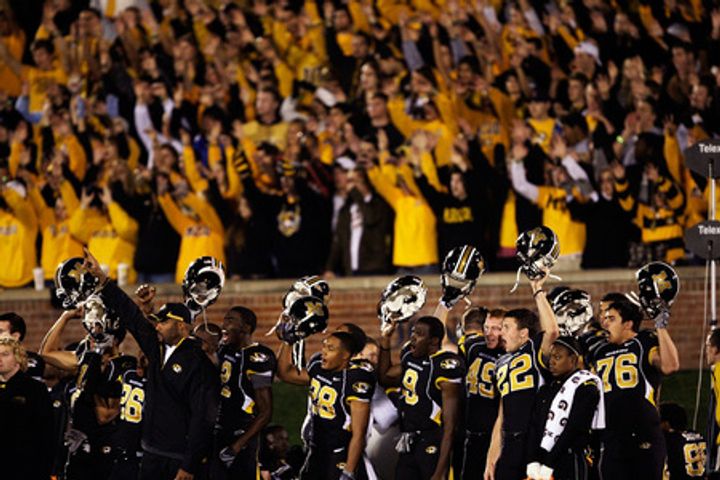 COLUMBIA - The new color analyst for University of Missouri Football radio broadcasts has been selected, and it's a former Tiger who will be joining Mike Kelly in the broadcast booth this season. Former Tiger and NFL standout Howard Richards has been selected as the new analyst, and he'll replace the legendary John "Mr. Mizzou" Kadlec in the booth beginning this fall. Kadlec had served as the color analyst for Mizzou Football broadcasts for the past 16 years (1995-2010) and decided to retire following the 2010 season.

A native of St. Louis, Missouri, Richards was a four-year letterman and starter at 40 consecutive games at right tackle for coaches Al Onofrio (1977) and Warren Powers (1978-80). A standout offensive lineman, Richards won 1st-Team All-Big Eight and 2nd-Team All-American honors as a senior, and he went on to become a 1st-round NFL Draft pick in 1981 by the Dallas Cowboys. Richards spent seven seasons in the National Football League, playing six with the Dallas Cowboys, followed by one year with the Seattle Seahawks before retiring after the 1987 season. He helped the Cowboys win four NFC East Division championships, along with making two consecutive NFC championship game appearances (1982-83). Following his retirement from professional football, Richards served for 13 years at the Central Intelligence Agency in several assignments, among which, he served on the security protective staffs of four CIA directors, along with serving a tour of duty in Tel Aviv, Israel.

Richards, who earned a communications degree from Mizzou (with an emphasis in radio/television) in 1988 following his retirement from football, said he is excited to put his degree to work for his alma mater.

"This is a unique opportunity," Richards said. "How many times has a person that attends a University as a student-athlete, then gets an opportunity to represent the school as part of the broadcast team? It was an opportunity that I really wanted to pursue. Especially given that Coach Kadlec, who I'm replacing, recruited me, I just couldn't turn it down. Of all the previous opportunities before me to attempt to break into a broadcast career, I would have looked back in regret had I not pursued this opportunity. There is still a lot of youthful enthusiasm in me to do this, and this process was almost like being recruited again," Richards said.

After retirement from football, Richards finished his degree work at Mizzou, and was accepted into Ohio University to take part in their prestigious graduate program. At the same time, however, he got an offer of employment with the Central Intelligence Agency (CIA), and he accepted that offer. Richards worked with the CIA for 13 years, before leaving the agency in 2003, when he went into the real estate business in the Washington, D.C. area until 2010, when he moved back to his native St. Louis to be closer to family. He also started his own personal security firm in 2008, working with former Agency colleagues, and he is still active with that business, doing almost all of his work internationally.

Even with that exciting professional background, Richards said that he always wanted to get into the broadcasting business, particularly with college football.

"Always in the back of my mind, I wanted to be in broadcasting," Richards said. "It was always a goal of mine, no matter what I was doing. With the time spent on campus at Mizzou preparing for this type of career, putting your educational foundation to work makes sense and I'm looking forward to this new challenge in life. I wouldn't want to begin at any other juncture than at Mizzou. I'm excited to work with our student-athletes and be able to share my perspective on football and life with them," he said.

"I am extremely excited about having the opportunity to work with Howard," said the Voice of the Tigers, Mike Kelly. "His playing resume speaks for itself, and he brings a level of credibility to the broadcast that Missouri fans expect. The fact that he is alumnus is certainly a bonus, and something Tiger fans will also appreciate," he said.

"There were a lot of quality candidates," Kelly said. "Howard definitely stood out, however, and I believe he'll work hard and do very well for Tiger fans and for the program. I'm very excited to begin working with him," Kelly said.