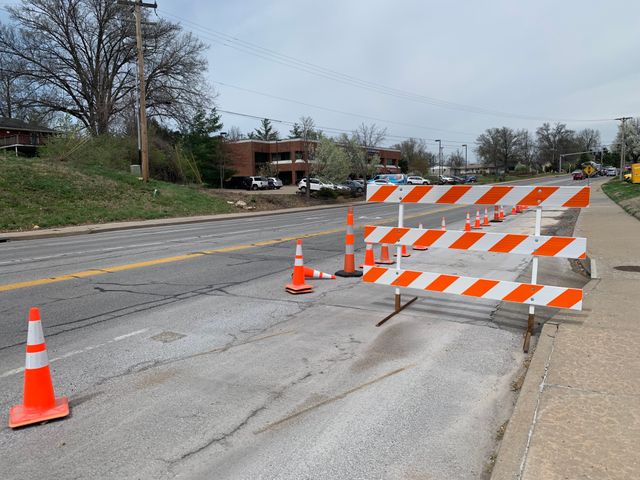 COLUMBIA - Columbia Public Works is extending the one lane restriction on Forum Boulevard while crews tries to find the source of water streaming out of a sidewalk onto the street.

Barry Dalton, a spokesperson for Columbia Public Works, said, "The issue is locating the source of the water if we can. Is it from a drain pipe? An underground spring? Is it runoff?"

The project is affecting nearby businesses. Maria Hernandez, owner of La Terraza Mexicana Grill, said she's noticed a drop off in customers.

"I feel like other people are taking different routes to go to their work, or their homes, especially on this side of town," she said.

Hernandez said the traffic flow is a real problem.

"Hopefully, it will get fixed pretty soon, and we'll have more business coming through," she said.

According to a Facebook post from Public Works, it has extended the lane restriction because crews cannot identify the source of the water.

Crews were excavating the area Wednesday. Public Works might need to install a French drain to catch the water before it gets to the roadway and redirect it to a storm drain.

Dalton said he doesn't know how the extension will affect the budget.

"There is always a cost to doing the work that needs to be done to repair and pave our city streets," Dalton said. "We budget for that, but I don't have any dollar figures on the current work as we are using city staff to do the work."

Public Works said it needs to identify the water issue soon, so Capital Paving can mill and overlay Forum Boulevard between Stadium Boulevard to the Hinkson Creek Bridge. That's due to happen in April or May, depending on weather conditions and contractor schedules.

"Our focus is getting the water off the roadway, so that we can repave the road," Dalton said.

Hernandez said she wants the project to end as soon as possible.

"Hopefully they can get it all done before Cinco de Mayo," she said. "I'm hoping because I don't want it to affect the celebration on that weekend."