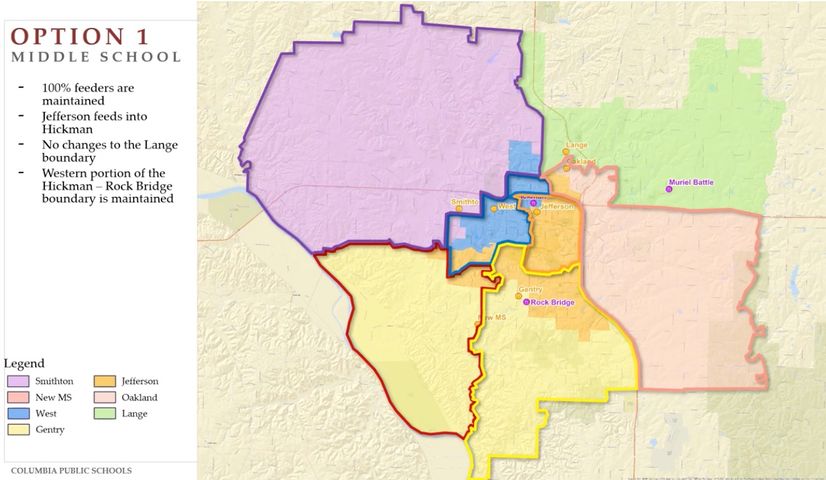 Scott Leopold with Cooperative Strategies presented four options to school board members and parents during a work session Thursday morning, just before the start of winter break.

Redistricting plans ultimately decide which high school students finish at, something parents and students alike see as a huge concern.

With a new middle school on its way in 2020, redistricting is a way for the school board to even things out.

Leopold's team conducted seven focus groups with teachers, students, parents and other key people to get to where they are now. He said they had to make some adjustments to some of the options after the focus groups.

“They wanted to see an option where we had a better socio-economic balance, so that’s where we kind of came up with option four,” Leopold said.

Watch the video to see Leopold's explanation of how the options work.

Columbia middle schools each feed into a single high school. Options three and four would break that flow, while options one and two would maintain it.

Several parents have voiced their concern about where their child will finish high school and whether their child may have to switch schools.

Shawna Schulte said she has a ninth grader who has had to move to several different schools so far because of the districting.

“I’m just concerned about where he will end up for the next three years,” Schulte said.

She said it’s important for her that her son and his friends move to high school together.

“It’s hard to make friends in middle school and it’s hard to loose some of your elementary friends and make new ones and so if they can go from middle school to high school with the same friends, that’s a big deal.”

Schulte said she’s not a fan of the fourth option, which does the opposite of what she wants.

“That option was not very high on my list of options because I think that’s super important that they feed into the same high school from the middle school and I appreciate that about our district now that that was a priority for them before, so I hope that that will remain a priority going forward,” Schulte said.

Heather Thomas said she has a daughter that is going to be in 11th grade. She said the community needs to get more involved.

“The board members need to hear from all of the parents,” Thomas said. “This is not just about the lines. Redistricting is going to happen no matter where you live and we just need our children to be able to finish where they start for just their mental wellness.”

There’s a survey anyone from the community, not just parents, can take to get their voices heard about the four options presented. The survey will stay open until Jan. 14.

People from the community will also have a chance to attend an open house to go over the four options. There are three open houses people can attend. There will be an open house at Gentry Middle School on Jan. 9 at 6 p.m., at Battle High School on Jan. 10 at 6 p.m. and at the Columbia Public Schools’ district office on Jan. 11 at 1 p.m.

Leopold said they will go over the survey results on Jan. 24 during the school boards’ work session and possible action on Feb. 11.