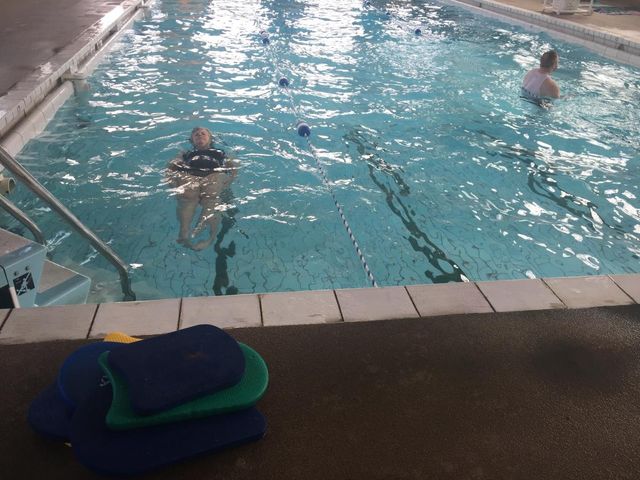 BOONVILLE - Second grade students at Hannah Cole Primary School in Boonville took a break from reading and writing to learn another valuable lesson on Tuesday: how to swim.

For two weeks, five classes of second graders have the opportunity to spend half an hour each school day at the Boonslick Heartland YMCA receiving free swim lessons.

The program is part of the Aquatic Safety Outreach sponsored by the YMCA and paid for through the United Way and the Partners With Youth Campaign.

"Out of the fatal drownings that occur in the United States each year, one in four happens to a child so this is a great way to prevent that," Aquatic Director Vanessa Dorman said. "One of the first things we talk to the kids about is what to do in case of emergency. If you are the one on the deck or the side of the lake and someone is drowning, most kids the first answer is you're going to jump in and save them, and that is not what we want them to do."

According to the Missouri State Highway Patrol, there were eight drownings in the state since August 30, 2014.

The students are given a swim test at the beginning of the program and then divided up based on their ability. Second grade teacher Melissa Baker said the students' progress is noticeable.

"They've become more comfortable around the water, they went from holding on to the edge to just jumping in now," Baker said. "They're not holding on to the instructor and now they're just swimming and kicking and having a good time."

In addition to improving their skills in the water, Baker said the students have also been more attentive in class since beginning swim lessons.

"Kids haven't missed school at all because they're looking forward to swimming and at the end of the year it gets kind of tiring and the kids are feeling the nice weather and are ready for summer and so swimming time it's a great break in the day and they're enjoying themselves," Baker said.

Baker said she's grateful her students have the opportunity to learn a "life-saving skill" during the school year because otherwise some may never have the chance.

"Boonville does offer swim lessons in the summer through the YMCA and through the Red Cross however that does cost money and a lot of times that's not in parents budgets so this is a free opportunity for the kids to help them be successful swimmers and become comfortable around the water," Baker said.

The swim lessons conclude on Thursday.