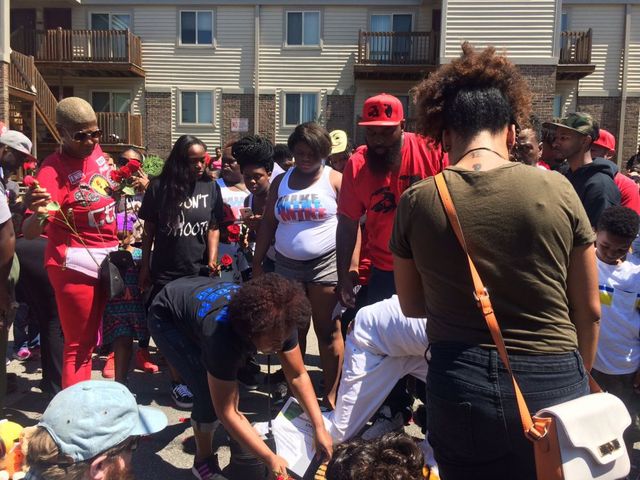 FERGUSON - Family, friends and members from the community gathered for a moment of silence at Canfield Green Apartments Wednesday for the three year anniversary of the shooting death of Michael Brown.

The 18-year-old was shot by Ferguson police officer Darren Wilson in 2014. Brown’s death sparked protests and riots in Ferguson, resulting in dozens of businesses being vandalized.

Wilson was not indicted by a St. Louis County grand jury in November 2014 and cleared by the U.S. Justice Department in March 2015.

The executive director of The Michael Brown Chosen for Change Foundation said right now the family is focusing on healing.

“They still have yet to get a true sense of justice,” DeMarco Davidson said. “They are still in mourning, but they are actually focusing on healing right now.”

Davidson said ever since the shooting, Brown’s parents have been focusing on giving back to the community. He also said the family holds healing events for families who are in similar situations.

“One of the biggest things we’ve done through our foundation is to connect with other families who also have sons and daughters who have been lost to either the community or police violence,” Davidson said.

Davidson said the family and the foundation have never been anti-police.

“We are focused on making sure the community understands how to govern themselves and how to police themselves, but also we ask people to take it personal,” Davidson said. “We always ask people that when they read the testimony of the officer who murdered Mike Brown to put their son’s name or their father’s name, their daughter’s, their mother’s name in place of Mike Brown and then they would have a sense of what type of injustice the family is feeling.”

“It’s improved faith in our police department from those who are most skeptical of our policing and police agencies,” Knowles said. “We’ve also instituted a civilian review board which is unlike anything you have in the St. Louis County region, where we actually have civilians who review cases and complaints against law enforcement.

Knowles said the main complaints people have in the community are traffic and dangerous drivers.

“We are seeing the benefits of the community policing,” James Knowles said. “Getting those people out of the cars and into the neighborhoods to talk to people.”

Despite those benefits, Knowles said the area is struggling to recruit new officers.

“Police work is just not the hottest job in the world,” Knowles said. “There are lots of opportunities but it’s not the job that a lot of people want to get into these days. So it makes it tough to be able to balance that public safety that you’re trying to provide also with the community engagement that you’re trying to do.”