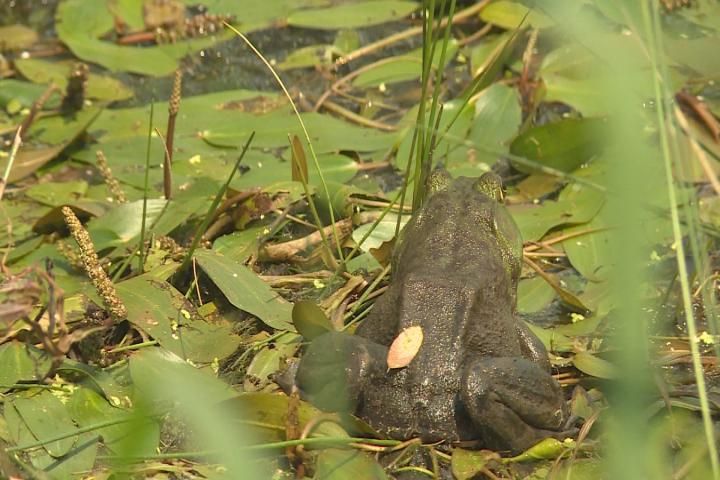 COLUMBIA - Frog hunting opened for the season Tuesday at sunset.

Frog hunting season runs through the end of October. The Missouri Department of Conservation allows people to hunt two types of frogs: bullfrog and green frog.

"Well the frogs certainly like the rain," he said. "I think it might actually make it a little more difficult because a lot of the ponds and rivers are swollen, and the water is up into the grass and things like that. So it might be a little more challenging trying to wade through some of that stuff and see them in that type of habitat rather than if the water had receded and exposed the shoreline a little bit more."

To be able to hunt frogs, people between the ages of 16 and 65 need to have either a fishing or hunting permit. Children younger than 16 and adults over 65 who livein Missouri do not need permits.

Rice said the best time to hunt is at night.

"Most people have success during the night because the frogs will come up out of the water, and you can see them a lot more visibly, and they won't hop away from you," he said. "And on a good night, when the frogs aren't real jittery, you can go right up to them and even grab them with your hands, which is one of the more fun ways to go out and do it, especially if you've got some kids that are learning how to do it."

People of all ages can enjoy frogging.

"Every year we have different events that we take kids out frogging," Rice said. "I think it's more fun just to watch a kid go out and catch their first frogs than it is even to do it myself."

Rice said the frog limit is eight a day, and people can have 16 in their possession at one time.

"What a lot of people will do is, if they're going to go out and hunt at night for frogs, they will go out before midnight, and if they're lucky, they'll get a full limit of eight, and they can take those frogs home or take them back to their vehicle," he said. "Then they can go back after midnight and take another eight, too. And as long as you don't have any more than 16 in your possession, then you're OK."

Rice said most public bodies of water that are open to fishing are open to frogging, but there might be some regulations.

"You would want to check with local lake regulations to make sure the lake doesn't close after dark or something like that that might prevent people from going in and frogging," he said.

MDC has a gigging clinic for kids 7-17 at the Ten Mile Pond Conservation Area in Mississippi County on July 11 and the Blind Pony Fish Hatchery in Saline County on July 24. MDC also has a list of recipes if people want to cook frog legs.