From the Dakotas to Missouri, the fight for water lives on 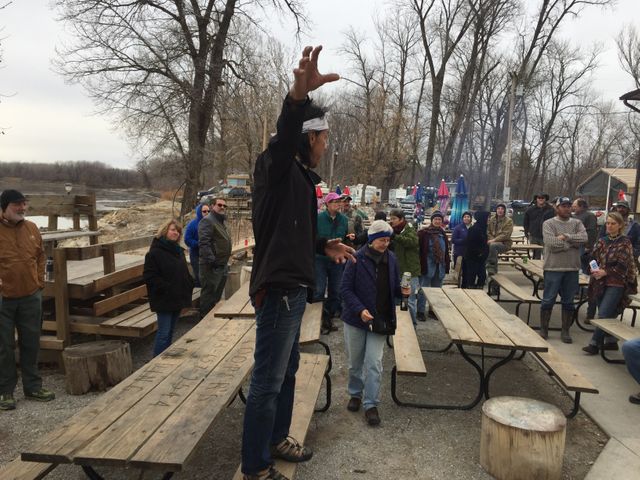 COLUMBIA - Maya Ketajanka saw the protests on Standing Rock Reservation first hand more than a year ago, now, he has brought the fight back to Missouri.

Inspired by the protests of the Dakota Access Pipeline by the Standing Rock Sioux tribe and thousands of others in North Dakota, Ketajanka created the Protectors of Water and Land.

PWL is a small group in Columbia focused on protecting and connecting people back to the waters and lands of Missouri, and keeping the Missouri River clean.

“All that happened in Standing Rock lit a fire in here,” Ketajanka said, gesturing to his chest.

From November of 2016 to January of 2017, they organized events, gathered donations and supplies and sent groups to North Dakota to help the protesters.

Ketajanka said he comes from a long line of warriors and he fights for what he believes in. In English, Ketajanka translates to Big Soldier. To show his fighting spirit Ketajanka raises his fist in the air.

"I hold that up stating that I'm here to fight, I'm here for this fight. Not only for water and land, but for humanity," Ketajanka said.

When the protest was forcibly stopped Ketajanka was disheartened, but realized he could bring the fight down stream to the Missouri River.

Ketajanka and others involved with PWL know how important the Missouri River is to everything around it and want to help start a conversation about the river.

“Use of our voices, which is very very powerful, that's one of the most powerful forces we have,” Ketajanka said.

This mission and conversation is not something one group can do alone, however.

“The analogy about the three strand cord, whenever two or more are joined together they are much stronger than just one,” Ketajanka said.

A strand of that cord is Missouri River Relief, a group that educates people about the Missouri River, organizes river clean-up groups and works with smaller organizations, like PWL.

Steve Schnarr has worked first-hand with Ketajanka and PWL and likes to see groups like this trying to help the Missouri River.

“To see a new energetic passionate group form before our eyes and find ways we can work together," Schnarr said.

Schnarr said the lesson they teach most is that the Missouri River makes up 41% of the drinking water for Missouri, however problems with litter and contaminants in the water make it harder for that water to become safe to drink.

Both Ketajanka and Schnarr know they need to get people to the river for them to start to care more about it.

"To raise that awareness, getting people to the river and developing a relationship with it," Ketajanka said.

Although the protests of the Dakota Access Pipeline on the Standing Rock Reservation are over, Schnarr knows the momentum from this event can continue.

"The challenge for all of us who are looking for long term relationships and benefits for the Missouri River, is to take that spark that was created from something like that and kindling it, helping to grow something continuously from that," he said.