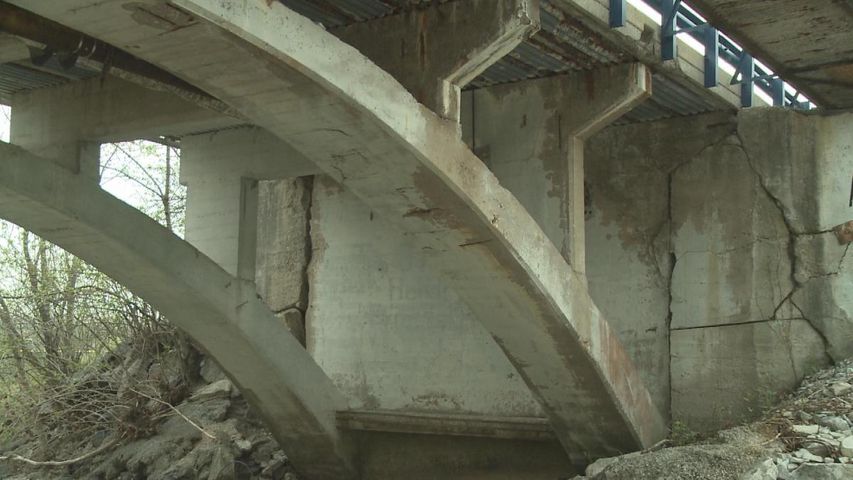 The city hired an engineering consultant to design the structure of the bridge and had six different bidders that competed to get the job.

"We interviewed several of the contractors that bidded on the job," Greg Hayes, a city engineer said. "This job is allowing for 90 calendar days to work on the project."

Initially, the city estimated the price of the reconstruction to be about $528,000 but the final price ended up being closer to $688,000.

"These are pretty tight deadlines but then again we had to match the Westminster College break because they've got a lot of facilities on the other side of this creek," Hayes said.

These cracks aren't anything new to city engineers. He said the city first noticed the cracks and deterioration on the bridge in the early '90s but nothing was done to improve the structure. But the city started to look at the pedestrian walkway and the walls on both sides and decided it was time to replace the bridge.

"All of the utility lines that you see hanging under the bridge are going to have to be temporarily located and/or shut off," Hayes said. "We're going to remove both end walls and we're going to a laid back slope where we're going to rip out both sides."

This will lengthen the bridge by 20 to 30 meters. Along with these changes, there will be six feet wide sidewalks on both sides of the bridge and the city council has also set aside an additional $50,000 to improve the railings.

Along with the money the city set aside to use for this project, it is also looking at the Surface Transportation Program from MoDOT to help with the cost. MoDOT gives the city of Fulton $44,000 each year but it is required to set aside or spend a certain amount of money by a given deadline.

The city is hoping to reach an agreement with MoDOT where it will reimburse the city with two years worth of funding because of the high bids that the city received.

Currently, the bridge connects the Westminster College to several student homes and the college's athletic field.

One Westminster sophomore Alyssa Busken lives in the student town home on the other side of the bridge and uses it to walk to class two to three times a day. One thing she said that would make the walkway better is making it wider.

"Whenever I walk on the bridge, it's fine when I'm walking by myself but if I see another person is coming I kind of wonder whether I should wait or try and go or if I have to scoot by sideways," Busken said. "It's kind of awkward so it could be a little bigger."

J.C. Industries will begin working on the bridge May 14 and are expected to finish by August 12.