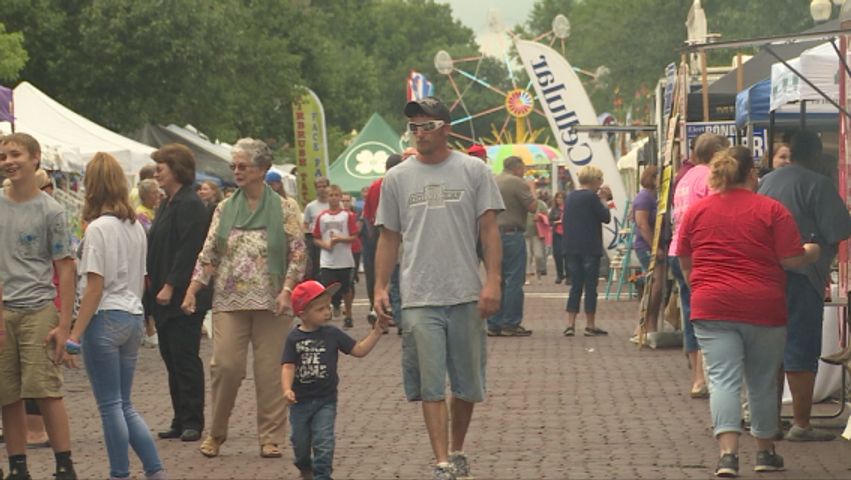 FULTON - The city of Fulton kicked off their annual Street Festival in style Friday with live music, a carnival, vendors, food trucks and a hot air balloon glow.

Festival-goers had even more to look forward to on Saturday. Festivities include a 5k run, car show, cornhole tournament, parade and fireworks show, all on top of the food trucks, live music, carnival and vendors people were able to enjoy Friday.

Dennis Campbell has lived in Fulton for the last 30 years and in all that time he hasn't missed a single Street Festival. He said a lot of things have kept him coming back year after year.

"Sometimes it's just being around people, meeting people you haven't seen in a while," Campbell said. "The funnel cakes, the pulled mutton and those sorts of things. It's just kind of a nice thing to do, especially when it's nice weather like we're having here."

Not only is the Street Festival a good opportunity for residents to mingle and relax, it's also a great opportunity for local and small businesses. Each year, tents filled with all kinds of wares line both sides of Court Street selling a wide variety of goods.

Wendy Wimmer sells wire rings and wire wrapped rocks. She said she enjoys the opportunity events like the Fulton Street Festival give businesses like hers.

"Because I'm a crafter and I make my stuff, it just gives me an outlet to make people happy," Wimmer said.

The festival is not just a place where people can relax and enjoy themselves. Campbell said he thinks the festival is an important part of Fulton's social and economic life.

"It gets people downtown, people kind of connecting and socializing and having a little fun and downtown businesses getting a little more exposure," Campbell said.

For those thinking about bailing on Saturday's festivities, Campbell said he has just a few words.

"Come on out," he said. "Come on out to the fair and enjoy yourself."